Nov 04, 2009 crazydead History of IRGC Comments Off on Executive Summary 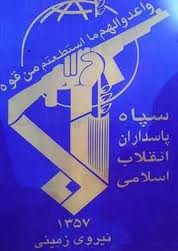 The entire Iranian Revolutionary Guard Corp, also known as the Islamic Revolutionary Guard Corps (IRGC), should be sanctioned by the European Union due to its terrorist activity, its support for Iran’s nuclear and missile programs and its suppression of the Iranian people. Multiple senior commanders of the IRGC have already been sanctioned by the UN Security Council and the EU for their involvement in Iran’s missile and nuclear programs. The EU has also already sanctioned the IRGC Air Force and the Khatem-ol Anbiya Construction Organization, an IRGC-owned group of companies assessed to support the Iranian ballistic missile and nuclear programmes.

Formed in the aftermath of the 1979 Islamic Revolution, the Revolutionary Guard is an elite military corps that operates independently of Iran’s regular armed forces and reports directly to the Supreme Leader. The IRGC is deeply involved in the country’s nuclear, missile and other weapons proliferation activities:

The organization actively supports insurgents in Iraq, provides aid to the Taliban in Afghanistan, and funds, trains, and equips, Hamas, Hizballah and other Palestinian terrorist organizations.

In addition the group brutally suppresses any internal threat to the stability of Iran’s theocratic regime as demonstrated by the recent and ongoing crackdown on election protestors.

The IRGC is deeply involved in the country’s nuclear, missile and other weapons proliferation activities: The IRGC has responsibility for the protection of Iran’s nuclear program and likely oversees covert bomb development activity. An undeclared uranium enrichment facility disclosed by the U.S., UK and France in September 2009 is reportedly located on an IRGC base near the city of Qom. The IRGC has operational control of the regime’s strategic arsenal of Shihab-3 missiles, with ranges capable of striking southeastern Europe.

The IRGC reportedly began its work in the nuclear field during the height of the Iran-Iraq war. According to the National Council of Resistance of Iran (NCRI), which exposed Iran’s clandestine nuclear program in 2002, by 1987 the program had established several research and development centers at various universities throughout the country and had a budget of $800 million for nuclear research. [1]

In July 2008, the British paper The Telegraph reported that the IRGC had setup several front companies around Tehran to manufacture components for advance P-2 centrifuges, capable of enriching uranium at 2-3 times the rate of previous P1 models. According to the report, a previous attempt to develop the P-2 had been halted in 2004 after IAEA inspectors uncovered the activity.[2] Senior IRGC officials are believed to have been part of Iran’s contacts with Pakistani nuclear scientist A.Q. Khan.

In February 1998, the British government identified the IRGC as having procured goods and/or technology for weapons of mass destruction programs, in “addition to doing non-proliferation related business;”[3]

In 2008 the U.S. Government designated the IRGC an entity of proliferation concern for its involvement in Iran’s missile program, According to the U.S Treasury Department:

Several of the IRGC’s leaders have also been sanctioned under UN Security Council Resolution 1747. These designations were later incorporated by the EU into its sanctions regime. Sanctioned individuals include:

On 3rd of January a news spread in social media regarding Qasem Soleimani and AbuMahdi Mohandes who has died by a US drone strike near Baghdad Airport and this was the end of their lives. In social media, especially Iranian users, there was a chaotic situation, some called of “the general of... END_OF_DOCUMENT_TOKEN_TO_BE_REPLACED