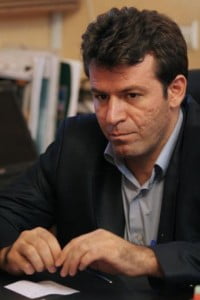 
Judge Moghiseh of branch 28 of Tehran’s Revolutionary Court has sentenced Mohammad Mostafaei in absentia to six years prison exile in the town of Izeh. He is charged with acting against national security by giving interviews to Persian-language media, in which he discussed the Sakineh Mohammadi Ashtiani case, and propaganda against the regime.

Even though Mostafaei was accused by the Tehran Prosecutor of trying to pull off a scam, he was not convicted on the charge of “trying to take over the property of another”, since there was no sufficient evidence to convict him.

Mostafaei is a justice lawyer and human rights activist who has taken on numerous juvenile offender cases in threat of execution and also the case of Sakineh Mohammadi Ashtiani.

Mostafaei was summoned to Evin prison’s Court Branch on July 21st. On the morning of July 24th, he visited the Intelligence Prosecutor’s office inside Evin prison and attended an interrogation session that lasted four hours. According to RAHANA, later in the afternoon, security forces went to Mostafaei’s office with an arrest warrant, but he was not there. There is no news on his whereabouts.