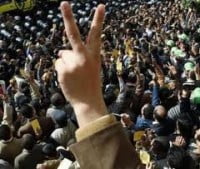 TEHRAN (NewsCore) – With internet-aided revolts spreading in the Mideast, Iran has strengthened its censorship of independent and pro-opposition websites and other electronic media in an attempt to hamper protests on its own soil, Reporters Without Borders said Tuesday.

The crackdown began on Feb. 10 in an effort to prevent the organization and reporting of protests in Iran. Nonetheless, thousands of demonstrators gathered in Tehran Monday chanting anti-Mahmoud Ahmadinejad slogans in protests that saw two people killed and several wounded.

Under the ramped up measures, broadband speed has significantly slowed in major cities as it did in the advent of other anti-regime demonstrations.

In addition to major disruptions in text-message traffic, the word “Bahman” — the present Persian calendar month — has been added to the list of blocked keywords for messages on mobile phones in an attempt to reduce calls for protests on a specific day.

Internet users have been unable to access two news sites, www.fararu.com and sahamnews.org, the latter of which has close ties to opposition leader Mehdi Karoubi, Reporters Without Borders said.

Satellite TV broadcasts to Iran have been jammed. At first, the disruptions targeted news about Egypt where President Hosni Mubarak bowed to more than two weeks of furious protests and stepped down after a 30-year rule. Soon all BBC and Voice of America broadcasts were cut off or became hard to pick up in Iran.

During remarks in Washington Tuesday, US Secretary of State Hillary Clinton reprimanded countries — including China, Vietnam and Syria — that deny their citizens open access to the internet, but she reserved her strongest rebuke for Iran where she said officials “block media websites, target social media, and steal identifying information about their own people in order to hunt them down.”

Clinton hailed the internet as an important tool to help bring about social and political change, praising its role during the recent protests in the Mideast. She seemed to also issue a warning to repressive regimes jittery over the uprisings in Tunisia and Egypt.