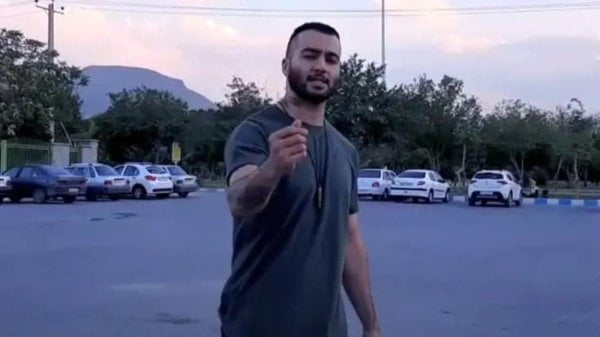 Iranian dissident rapper, Toomaj Salehi, who was detained on September 13 was arrested by the intelligence ministry in Esfahan, family sources have told Iran International. They are extremely worried about the safety of the young singer.

The underground rapper was apparently arrested for his latest song distributed on social media, condemning the Islamic Republic for oppression and those whom he accuses of whitewashing its crimes.

Iran International has also learned that the singer known with his first name Toomaj is being kept in the central prison in Esfahan. His lawyer Amir Raisian was quoted by a website in Iran as saying that he does not have exact information about charges his client faces, but “unofficially his father was told he is accused of propaganda against the regime.”

In his song, “Buy a rat hole”, Toomaj without naming individuals refers to those whom he accuses of perpetrating injustice or justifying it, from regime “agents” and “executioners” to political groups such as reformists in Iran and the US-based National Iranian American Council (NIAC).

The Washington-based group condemned Toomaj’s arrest on September 16, after many on social media criticized indifference toward the latest crackdown on freedom of speech.

Amnesty International has also condemned the arrest in a statement issued September 17. Iran’s exiled Prince Reza Pahlavi has also slammed the arrest, saying that protest artists are reflecting public opinion in Iran in favor of a regime change.