BREAKING NEWS
GMT+2 11:39
Home Human Rights Fauci: No scientific evidence the coronavirus was made in a Chinese lab

Posted By: crazydeadon: May 06, 2020In: Human Rights
Print Email

Anthony “Tony” Fauci has become the scientific face of America’s COVID-19 response, and he says the best evidence shows the virus behind the pandemic was not made in a lab in China. 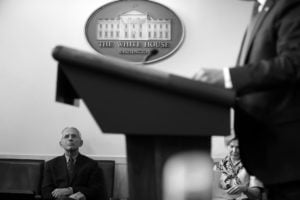 Fauci, the director of the U.S. National Institute of Allergy and Infectious Diseases, shot down the discussion that has been raging among politicians and pundits, calling it “a circular argument” in a conversation Monday with National Geographic.

“If you look at the evolution of the virus in bats and what’s out there now, [the scientific evidence] is very, very strongly leaning toward this could not have been artificially or deliberately manipulated … Everything about the stepwise evolution over time strongly indicates that [this virus] evolved in nature and then jumped species,” Fauci says. Based on the scientific evidence, he also doesn’t entertain an alternate theory—that someone found the coronavirus in the wild, brought it to a lab, and then it accidentally escaped.

Fauci is most concerned that the United States will be put to the test this fall and winter by a second wave of COVID-19 if the country does not blunt the infection rate by the summer.

“Shame on us if we don’t have enough tests by the time this so-called return might occur in the fall and winter,” he says, advising that the U.S. needs to make sure we not only have an adequate supply of tests available before a second wave hits, but also a system for getting those tests to the people who most need them.

“I don’t think there’s a chance that this virus is just going to disappear,” he says. “It’s going to be around, and if given the opportunity, it will resurge.” As such, Fauci says the U.S. should also focus this summer on properly reinforcing the nation’s health care system, ensuring the availability of hospital beds, ventilators, and personal protective equipment for health care workers.

He also stressed the importance of continuing to social distance everywhere until the case counts start to fall in cities and states. The U.S. witnessed about 20,000 to 30,000 new cases every day in the month of April, suggesting the country is stuck in its peak.

Still, he remains optimistic that a vaccine will be ready within an historically short time frame, citing one promising candidate that he thinks may move into advanced clinical trials by the early summer. Fauci has said that he thinks a final vaccine could be available for general use as early as January, which would break records for the speed at which previous vaccines were developed.

One reason for his confidence is the “impressive” results being seen now in animals tested with a vaccine candidate made by Cambridge, Massachusetts-based Moderna Therapeutics, which brought it into human trials in a record 42 days. The candidate is what is known as an mRNA vaccine—a drug that uses snippets of a virus’s genetic material—rather than the dead or weakened virus itself—to build the proteins that trigger the body’s protective immune response. Read more