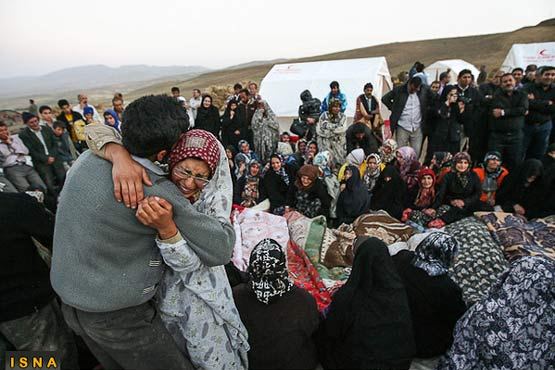 From Security Charges to Moldy Bread: Details of Earthquake Camp Raid and Arrests.

In an interview with the International Campaign for Human Rights in Iran, Ahmad Ronaghi Maleki provided details about the raid on the earthquake relief camp and the brutal arrests of volunteers, including verbal and physical abuse.

Two days after police and plainclothes forces attacked the earthquake relief camp and arrested 35 relief workers on Thursday, August 23, ten detainees (all of the female and three of the male detainees) were released on bail. The rest of the relief workers were transferred to the Central Prison of Tabriz, according to Kaleme website.

manufacturing plant. Relief workers collected donated goods and used the factory’s warehouse to store supplies. Some of the 35 relief workers were students and civil activists who had set up tents around the factory, where they lived.

Kaleme website reported that male relief workers were transferred to Ahar Moral Security Base and female relief workers were transferred to the town’s Investigative Police Office. Within the first few hours, three judges from the judicial complex of the town of Khajeh informed the detainees they were being charged with “political activities through helping the earthquake victims.” However, during interrogations with Ahar intelligence forces, they were accused of “threatening public health through distributing unsafe food items.”

On Sunday, August 26, confirming the arrests of more than 30 individuals in the earthquake-hit areas of Azerbaijan province, in an interview with the Iranian Student News Agency (ISNA), Hojat-ol-Islam Malek Ajdar Sharifi stated, “Several individuals arrived to this region as relief workers to help the Eastern Azerbaijan people affected by the earthquake, but because the items and goods they had brought to distribute had expired ‘use-by’ dates, they were arrested. He added, “These suspects intended to distribute goods such as expired canned foods and moldy bread among the earthquake victims. This issue is under the review of health and law experts.”

In an interview with the International Campaign for Human Rights in Iran, Ahmad Ronaghi Maleki, one of the arrested relief workers released on August 23, spoke about the incident. Ronaghi Maleki was at the camp along with his sons Hossein and Hassan Ronaghi Maleki; his sons are still being held. Hossein Ronaghi Maleki is a political prisoner who had been out on medical furlough. The family went to the earthquake region to help victims.

ICHRI: When did this camp start its activities and where exactly is it located?

Ahmad Ronaghi Maleki: This camp was set up one day after the earthquake by several people from Tabriz and from other cities. We rented the warehouse of a plastics factory on the Varzaghan Road to keep and distribute people’s donations. At first, we started with three trucks, and little by little, as more volunteers from other cities came, the number of trucks and donations increased. All the kids had set up tents around this factory. We worked really hard day and night and distributed the goods containing clothing, food items, hygiene items, and all kinds of other things, to earthquake victims. We weren’t doing anything political there. What was our crime?

ICHRI: How did the attack on the camp happen?

Mr. Maleki: On the afternoon of August 23, forces from Khajeh Police came and told us that we must evacuate and relinquish the collected goods to them. They said that the food items inside the warehouse were unsafe. We told them we would stop the food distribution and wait for them to dispatch a representative from the Health Office, and if that representative said after tests that the food inside the warehouse was unhygienic, we would relinquish the goods to the police and go. We even asked that they send a representative from the Red Crescent or the Imam Khomeini Relief Foundation, so that we could hand over all the collected goods with a complete list and leave. We even took them inside the warehouse and showed them the food items. They said everything looked good and left, but a few hours later, several vehicles full of police forces and forces from the Khajeh Police and plainclothes forces poured in and beat us up inside the warehouse and took us away. One of the forces punched Hossein in the stomach several times and when I objected, he punched me several times, too. Then they blindfolded and handcuffed us and even abused us during the drive. They even insulted me, disregarding my older age, and kept saying rude things to me and the others.

ICHRI: Where did they transfer you?

Mr. Maleki: I don’t know where they took us. Our eyes were blindfolded; I couldn’t see. I was there one day. I was interrogated and then released. But I consider this act illegal, against Sharia, and inhumane. If helping the earthquake victims is a crime, they should have announced that people are not supposed to help the earthquake victims. Nowhere in the laws or Sharia does it say that helping another human being is an offense. If I have a problem and others help me, is it considered a crime?

ICHR: Were the reasons for the raid on the camp and your arrest mentioned in the interrogations? What exactly was your charge?

Mr. Maleki: Well, in the interrogations, they only said that our charges were distribution of unhealthy food items to earthquake victims. Frankly, I am confused, I don’t know. The Khajeh police forces must explain the reasons for all those insults on us.

ICHRI: Were the goods inside the warehouse transferred? What happened to the items inside?

Mr. Maleki: I don’t know. I was released on Thursday and with the way I had been treated, I didn’t go back to check on the warehouse.

ICHRI: Could you provide a rough estimate of how much stock was inside the warehouse?

Mr. Maleki: There were about 10 to 15 truckloads of goods in there.

ICHRI: In a news article, the Young Journalists Club announced that the detainees were all affiliated with foreign states, or were Baha’is whose aim was to propagate the Baha’i faith. What do you think about these claims?

Mr.  Maleki: This is an absolute lie. I am a Muslim and a Seyed [considered a descendent of Prophet Mohammad]. There were no Baha’is there at all. Everyone was a Shia Muslim. There is no way anybody could propagate the Baha’i faith in the middle of an earthquake and so much sorrow! All the people in that group were Muslims who were helping earthquake victims for God’s satisfaction. Whoever wrote this news only wanted to manufacture rumors.

ICHRI: Why do you think they wanted you to evacuate the camp?

Mr. Maleki: Well, they say the government wanted to distribute the goods itself, without other people’s interference. But people are also entitled to help their fellow countrymen who have been affected by an earthquake.

ICHRI: Were any of the relief workers hurt when the forces beat them?

Mr. Maleki: A few of them were badly beaten. I don’t know. I had pain in my chest and my blood pressure went up. But I should also add that some of the agents behaved very well, while others behaved very badly.

ICHRI: Were the female relief workers beaten, too?

Mr. Maleki: I didn’t see it. Hossein and I were sitting upfront. When they were punching Hossein and he kept saying “my kidneys, my kidneys,” I wasn’t paying any attention to anyone else. I could only see my son. But, really, what was our crime? We worked around the clock for several days, we collected items and distributed them among the people. The Khajeh police forces must be accountable for this incident.