Sun Aug 9, 2009 6:30PM
As Iran moves to squelch opposition to the disputed June presidential election, the stage has been set for the judiciary to try two defeated candidates and a former president. 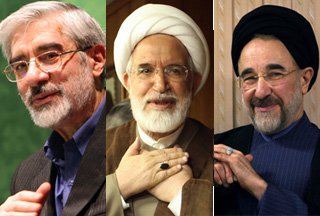 Brigadier General Yadollah Javani, head of the IRGC’s political bureau, said it was absolutely vital to defend the integrity of the 30-year-old Islamic Revolution amidst a “Western-backed plot to topple the government through a ‘velvet coup’,” the Islamic Republic News Agency (IRNA) reported Monday.

“The question is who were the main plotters and agents of this coup. What is the role of Khatami, Mousavi and Karroubi in this coup?” he wrote in an article in the weekly IRGC journal.

The crackdown against the street demonstrations resulted in the arrest of thousands of opposition figures, protesters and journalists — who have been put on trial on charges of plotting to topple the government –, and the deaths of at least 30 people.

During their hearings in the Revolutionary Court, many of the defendants have confessed to aiding foreign countries in the post-vote developments.

Iranian authorities blame world powers, particularly Britain and the US, for the turmoil, and accuse them of instigating the unrest in line with staging a “velvet revolution” in the country.

The trials have raised the ire of the opposition with their public symbols, Mousavi and Khatami, terming the prosecution as a “sham” and claiming the confessions were extracted under torture.

However, the IRGC official believes the affirmation of guilt can be used by the judiciary to convict those who are truly to blame for the “failed coup.”

“If Mousavi, Khatami, [Ayatollah Mohammad] Mousavi Khoeiniha (Iran’s prosecutor general after the victory of the revolution in 1979) and Karroubi are the main suspects believed to have been behind the velvet coup in Iran, which they are, we expect the judiciary … to go after them, arrest them, put them on trial and punish them according to the law,” Javani was quoted by IRNA as saying.

The remarks also echo increasing pressure by the ruling system on the opposition who alleges that the June 12 election was rigged and continues to defy the result.

The vote, hailed by President Ahmadinejad and the Guardian Council, the body tasked with overseeing elections, as the “healthiest” vote in the history of the Revolution, has also presented an influential critic.

Ayatollah Akbar Hashemi-Rafsanjani, the head of the Assembly of Experts and Chairman of the Expediency Council, has denounced the government’s handling of the controversy over the election and urged officials to release the protesters still in custody.

However, Rafsanjani, who is to deliver a sermon at the Tehran University prayer hall on Friday, has been harshly criticized for his stance by supporters of President Ahmadinejad and a number of officials in the Principlist camp.

An Iranian lawmaker, Nasrollah Torbai, on Sunday moved to quiet the criticism by boasting the credentials of Ayatollah Rafsanjani and the leaders of the opposition.

“It has taken years and a vast amount of political capital has been spent on the likes of Mousavi, Hashemi-[Rafsanjani], Khatami, Karroubi and [Hojjatoleslam Ali-Akbar] Nateq-Nouri to grow and serve the Revolution,” Torabi was quoted by Parleman News website as saying.

“Why is it that the trust of the people is not regarded as the most valuable treasure in the country?” he queried.

Ayatollah Rafsanjani had said during his Friday Prayers sermon on July 17 that the ambiguities surrounding the presidential election had led to the distrust of the Iranian nation in the establishment.

“Doubt has been created,” he said. “There are two currents; one has no doubt and is moving ahead. And the other is a large portion of the wise people who say they have doubts. We need to take action to remove this doubt.”

On 3rd of January a news spread in social media regarding Qasem Soleimani and AbuMahdi Mohandes who has died by a US drone strike near Baghdad Airport and this was the end of their lives. In social media, especially Iranian users, there was a chaotic situation, some called of “the general of... END_OF_DOCUMENT_TOKEN_TO_BE_REPLACED