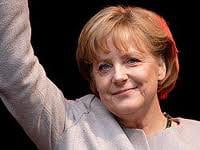 The German government on Wednesday strongly condemned the violent suppression of pro-democracy demonstrations in Iran and countries across the Middle East.

‘We call upon the Iranian government not to deny the Iranian people the very rights and freedoms to which they just congratulated the Egyptian people,’ Seibert said, in reference to Teheran’s words of support following president Hosny Mubarak’s resignation.

‘It is entirely unacceptable how the Iranian government is trying to suppress the right to freedom of expression with violence and intimidation,’ Seibert continued, assuring protesters of support from Europe.

‘The chancellor assures the many Iranians courageously taking to the streets that their call for freedom and human rights will be heard in Germany and Europe,’ Merkel’s spokesman said.

Seibert also condemned the more than 200 members of Iran’s parliament who on Tuesday demanded death sentences for opposition leaders.

‘The German government expects the threats against leading Iranian opposition politicians to have an immediate end,’ Seibert added, calling on Teheran to prove its strength by protecting regime critics and their rights.

Our Life Depends on Executions