Former Israeli cabinet minister Gonen Segev is to be jailed for 11 years after he admitted spying for Iran, Israel’s justice ministry says. 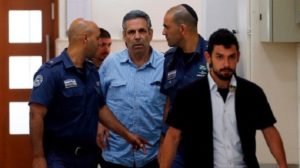 Segev, who served as energy minister in the 1990s, was allegedly recruited while working as a doctor in Nigeria.

He was accused of leaking details about Israeli officials and security sites.

Segev was detained in Equatorial Guinea in May and extradited to Israel. He pleaded guilty to serious espionage as part of a deal with prosecutors.

The 63-year-old will be formally sentenced at a hearing on 11 February.

There was no immediate comment from the Iranian authorities.

Ever since the Islamic Revolution in 1979, when religious hardliners came to power, Iran’s leaders have called for Israel’s elimination. Iran rejects Israel’s right to exist, considering it an illegitimate occupier of Muslim land.

In 2005, Segev was given a five-year prison sentence after being convicted of trying to smuggle 30,000 ecstasy pills from the Netherlands to Israel using a diplomatic passport with a falsified expiry date.

He also had his licence to practice medicine revoked, but he was allowed to work as a doctor in Nigeria when he moved there after his release from jail in 2007.

Israel’s internal security service, Shin Bet, said in June that Segev had confessed to making contact with Iranian embassy officials in Nigeria in 2012 and visiting Iran twice to meet his handlers.

He was allegedly given a classified communications system to send coded messages and passed on “information related to the energy sector, security sites in Israel and officials in political and security institutions”.

While Segev admitted to the charge of espionage, he reportedly told investigators that he had been trying to “fool the Iranians and come back to Israel a hero”.

An initial charge of “assisting an enemy during a time of war” was removed from his indictment as part of his plea bargain.

Further details of the case remain under a gag order.

“The district attorney’s office wants to reveal more details about the affair, and once it’s out, it will be clear that Segev indeed had contacts with Iranians, but not to aid them,” Segev’s legal team told the newspaper Yedioth Ahronoth.

“That is why the treason charge was removed from the amended indictment.”
—

On 3rd of January a news spread in social media regarding Qasem Soleimani and AbuMahdi Mohandes who has died by a US drone strike near Baghdad Airport and this was the end of their lives. In social media, especially Iranian users, there was a chaotic situation, some called of “the general of... END_OF_DOCUMENT_TOKEN_TO_BE_REPLACED