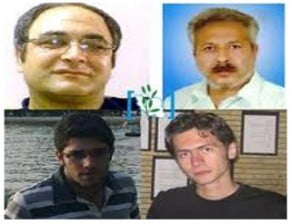 According to a report by Human Rights Activists News Agency (HRANA), the aforementioned individuals are labor activists and students in the city of Tabriz. The Revolutionary Court, Branch 1, has issued verdicts sentencing them to a total of 22 years and 6 months in prison. A fifth defender, Buick Sydler, was found not guilty.

Shahrokh Zamani was sentenced to 11 years in prison on charges of organizing an opposition group and propaganda against the regime.

Sasan Vahebivash received a 6 month prison term on charges of the membership in an organization opposing IRI and propaganda against the regime.

The Revolutionary Court, Branch 1, tried and convicted these leftist labor activists and students on August 18, 2011. Prior to this trial, a bail approximately equivalent to $94,000 was set for Nima Pouryaghob while Sasan Vahebivash and Buick Sydler each posted approximately $30,000 bail to be temporally released from Tabriz Prison.

The verdicts issued against these political activists are unprecedented in Tabriz in the recent few years.

Iraq struggles to distance itself from US-Iran tensions

Concern for life of political prisoner who disappeared from cell

Khamenei strategy for Syria and other Arab countries