TEHRAN (Tasnim) – The Lebanese Hezbollah Resistance Movement enjoys such a high degree of military power that it can launch a non-stop barrage of rockets on any part of Israel, a senior commander of the Islamic Revolution Guards Corps (IRGC) stated.

Lebanon’s Hezbollah has such a power today that it can bring the entire Israeli cities under the heavy barrage of its missiles incessantly,” IRGC lieutenant Commander Brigadier General Hossein Salami said on Sunday. 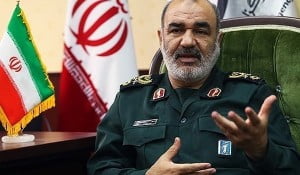 The commander explained that such state of preparedness stems from the dogged determination of the Iranian nation in confronting the enemies.

Pointing to the recent Israeli offensive against the Gaza Strip, Salami added, the Gaza war is a prelude to the annihilation of Israel.

He also underlined the necessity to fend the Islamic countries off the enemies, alluding to the Israeli atrocities against people of Gaza.

His comment came as more than 1,000 Palestinians have been killed, and over 6,000 other injured in the besieged enclave during the Israeli three-week-long offensive on the besieged Gaza Strip.

Since July 8, Israeli warplanes have been pounding numerous sites in Gaza, demolishing houses and burying families in the rubble. Israeli tanks also began a ground offensive against the impoverished Palestinian land on July 17.

On 3rd of January a news spread in social media regarding Qasem Soleimani and AbuMahdi Mohandes who has died by a US drone strike near Baghdad Airport and this was the end of their lives. In social media, especially Iranian users, there was a chaotic situation, some called of “the general of... END_OF_DOCUMENT_TOKEN_TO_BE_REPLACED