How Iran’s mafia-like Revolutionary Guard rules the country’s black market – The revolutionary children of the Ayatollah Khomeini, the Pasdaran, were …

The revolutionary children of the Ayatollah Khomeini, the Pasdaran, were the poor, marginalized thugs of the Shah’s era, people with a huge appetite for violence. They founded the Islamic Revolutionary Guard Corps, the IRGC, and became the main tool of oppression in the hands of Iran’s theocratic regime. 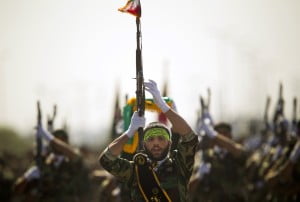 Over the past three decades, the Guard has evolved and built a powerful military-industrial-financial complex. And they have not limited themselves to the normal economy. The IRGC has expanded Iran’s underground economy and its own control over it, building a mafia cartel in the process. Consequently, it is not surprising that in its 2011 plot to assassinate the Saudi ambassador in Washington, the Quds Force, the IRGC’s external operations wing, sought the help of Mexican drug cartels.

A close look at the IRGC’s involvement in Iran’s underground economy shows that the Guards are no strangers to the underworld. They control it.

Iran has notably weak rule of law — and its underground economy is thriving. The IRGC is the major player in this shadow economy. For the IRGC, the underground is an unobservable source of wealth that is nevertheless important to understanding the Guard’s abilities and behavior.

The underground economy, as the IRS defines it, “represents income earned under the table and off the books.” It can include legal income laundered to avoid taxation, and also the trade in explicitly illegal goods, like drugs or weapons.

Iranian general: We formed Shiite army to fight in Iraq, Syria and Yemen

Iran’s Regime Disgraceful Act in Handing Over Island to China: Sign of Mullahs’ Desperation and Deadlock

UN finds evidence of 27 per cent uranium enrichment in Iran