Posted By: on: May 31, 2018In: Arrests, Executions, Human Rights, Slider
Print Email 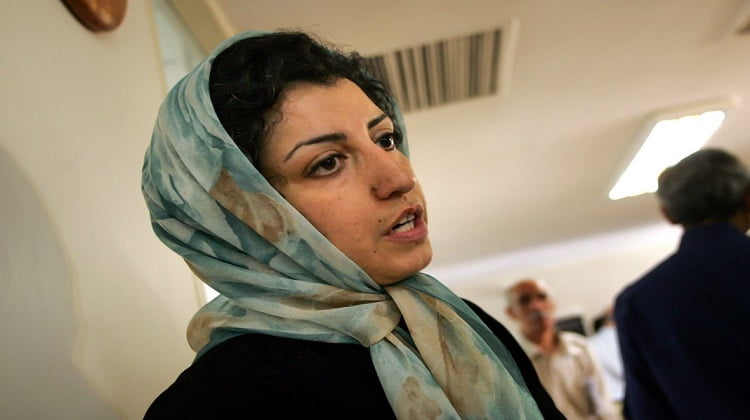 Mohammadi also is a prisoner in Tehran’s infamous Evin Prison.

“Sitting here in the prison, I am humbled by the honor you have bestowed on me and I will continue my efforts until we achieve peace, tolerance for a plurality of views, and human rights,” Mohammadi said in a speech written for the award ceremony obtained by the Center for Human Rights in Iran. The prize is named after the Russian physicist who received the 1975 Nobel Peace Prize for his human rights activism.

Mohammadi has faced arrest and imprisonment multiple times, the last time in 2015.  A revolutionary court in Tehran sentenced her to 16 years in prison for “propaganda against the state,” reports the U.S. Department of State’s 2017 Country Report on Human Rights in Iran.  Her peaceful campaign to end Iran’s routine public executions and mass executions, called Step by Step to Stop the Death Penalty, was deemed harmful to Iran’s national security by the court in violation of her personal right to freedom of expression.

The American Physical Society’s Sakharov Prize committee recognized Mohammadi “for her unwavering efforts to promote the human rights and freedoms of the Iranian people.” The U.S.-based physics organization awards the prize every other year to scientists for their leadership in advocating human rights.

While Mohammadi has been in prison, authorities have repeatedly denied her medical attention for significant health problems as a form of punishment and have denied her family visitation and telephone calls.

Her husband, Taghi Rahmani, and twins, Ali and Kiana, now 11, fled Iran after Mohammadi’s arrest and live in France. Families of prisoners routinely face harassment and threats from government authorities in Iran.

Iranian prison conditions are particularly harsh and life-threatening due to food and water shortages, gross overcrowding, unsanitary conditions, physical abuse and torture, including rape, according to the State Department. Brutal interrogations can be deadly.

A prisoner of conscience

The courts gave Mohammadi a choice: She could earn her release from prison on the condition that she remain forever silent on the topic of human rights in Iran. Mohammadi replied in a 2017 open letter, “Rather than being a mother to my son and daughter and witness Iran’s future turning to ashes, I prefer being a mother behind bars in Evin Prison fighting for the human rights of the future children of my homeland.”

Mohammadi is one of the estimated 700 prisoners of conscience locked away by the Iranian regime in 2017, including those jailed for their religious beliefs.