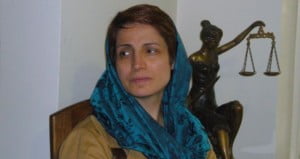 A Lawyers’ Court at the Tehran Bar Association has determined that human rights lawyer Nasrin Sotoudeh is able to continue her legal practice, according to an August 30, 2014 status update on her husband Reza Khandan’s Facebook page.

According to Khandan, the Lawyers’ Court denied the Tehran Prosecutor’s Office request for the suspension of Sotoudeh’s license to practice, and stated in a ruling that, “In the opinion of the Lawyer’s Court, Ms. Sotoudeh’s temporary suspension was unwarranted and will be overruled. According to this ruling Ms. Sotoudeh can continue her profession as a lawyer.

Reza Khandan wrote that Sotoudeh appeared at a hearing at the Lawyers’ Court on Sunday, August 24, 2014, and she was formally served with the Court’s ruling on August 30. The plaintiffs in the case were the Tehran Deputy Prosecutor and the Evin Prison Court Supervisor, who had requested the suspension of Sotoudeh’s license to practice law.

After almost three years in prison, Nasrin Sotoudeh was released on September 18, 2013. During her imprisonment, Ms. Sotoudeh embarked on numerous hunger strikes to protest her ill-treatment in prison and the abuse of other political prisoners.

Upon release, Nasrin Sotoudeh objected to the ruling by the Tehran Revolutionary Court to suspend her license to practice law, asserting the Court’s lack of jurisdiction over this matter. She subsequently renewed her license and announced that she would continue her legal practice. However, judges have refused to allow her to appear in court to represent her clients. Human rights lawyer Giti Pourfazel told ISNA on August 29 that Judge Salavati did not allow Nasrin Sotoudeh to enter Branch 15 of Tehran Revolutionary Court in a case she co-represented with Sotoudeh.

The targeted persecution of human rights defenders has been a routine practice in Iran, particularly after the disputed 2009 presidential election in the country.

On 3rd of January a news spread in social media regarding Qasem Soleimani and AbuMahdi Mohandes who has died by a US drone strike near Baghdad Airport and this was the end of their lives. In social media, especially Iranian users, there was a chaotic situation, some called of “the general of... END_OF_DOCUMENT_TOKEN_TO_BE_REPLACED