Nov 09, 2017 Arrests, Human Rights, Slider Comments Off on Husband of jailed British woman pleads with Boris Johnson to take him to Iran so he can see his wife

The family of a British charity worker jailed in Iran ‘watched in horror’ as state TV said Boris Johnson’s gaffe was a ‘confession about her real plot’ in a bulletin also beamed into her jail. 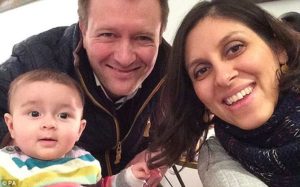 The Foreign Secretary has faced calls to quit after he said Nazanin Zaghari-Ratcliffe was ‘simply teaching people journalism’ during a 2016 trip to April.

Mr Johnson’s words to a Commons committee last week has destroyed 18 months of trying to free her, according to last night’s Iranian state TV bulletin.

Mrs Zaghari-Ratcliffe was hauled into court after his intervention on a new propaganda charge that could double her sentence to ten years.

In an item titled ‘Confession’ Iran’s Channel 2 said last night that Nazanin’s ‘real plot’ had now emerged and said: ‘Mr Johnson’s inadvertent confession was a gaffe that can not be covered up’.

The bulletin was seen by her family in Iran and the crisis has left their daughter, Gabrielle, three, who is living with them, refusing to eat because of her grief.

Mr Ratcliffe, who says his wife would have also seen it in prison, told MailOnline today: ‘It feels like parts of the Iranian regime are still using the Foreign Secretary’s comments against Nazanin.’

The 38-year-old from Hampstead in north London has been held in prison on spying charges, despite insisting her trip was just a holiday.

After Mr Johnson’s gaffe she was hauled back to court to face new charges of ‘propaganda against the regime’ that could result in her sentence being doubled.

The Foreign Secretary has called Iran to ‘clarify’ his comments and insisted his counterpart Mohammad Javad Zarif assured him the new charges were ‘unrelated’ to his remarks.

But Iran’s TV news has given a different impression.

‘Following the news Nazanin’s mother was too distressed to complete cooking the family meal, and was unable to speak to anyone for a number of hours. Gabriella, always alert to the mood, refused to eat what was put before her.

‘Nazanin’s family have sent the clip to the Iranian authorities asking for the British Embassy to issue a public statement in Farsi clarifying.

‘The Channel 2 news is also the news allowed to the prisoners in Evin prison, which Nazanin watches with her fellow prisoners every night. Her reaction to seeing herself publicly framed by the Iranian authorities is as yet unknown.’

He spoke of how the Iranian Judiciary have adopted a different position to claims made to Foreign Secretary, Boris Johnson, saying: ‘The Foreign Secretary had been assured by Foreign Minister Zarif there was no connection between Nazanin’s new legal case, and his loose words last week, and argued that it would not be costly to Nazanin’s case.

‘Unfortunately, this does not seem to be the position that the Iranian Judiciary have chosen to adopt’, he said.

‘As a family we have long accused the government of not publicly acknowledging the gravity of her situation.

‘The Foreign Secretary’s statement to Parliament included an apology, couched in terms of offence arising from perhaps unexpected misunderstanding, as though this was a matter of interpretation rather than substance. There felt some reluctance in taking responsibility for the misunderstanding and need for correction in Iran and UK.

‘While in Parliament there was a welcome correction, clear and unequivocal, to the family’s knowledge no such correction has been issued in Iran by the British Embassy in Tehran to the Farsi-speaking media in Iran. There is not yet a statement of clarification on the British Embassy website’.

Read More: Daily Mail – Husband of jailed British woman pleads with Boris Johnson to take him to Iran so he can see his wife

On 3rd of January a news spread in social media regarding Qasem Soleimani and AbuMahdi Mohandes who has died by a US drone strike near Baghdad Airport and this was the end of their lives. In social media, especially Iranian users, there was a chaotic situation, some called of “the general of... END_OF_DOCUMENT_TOKEN_TO_BE_REPLACED