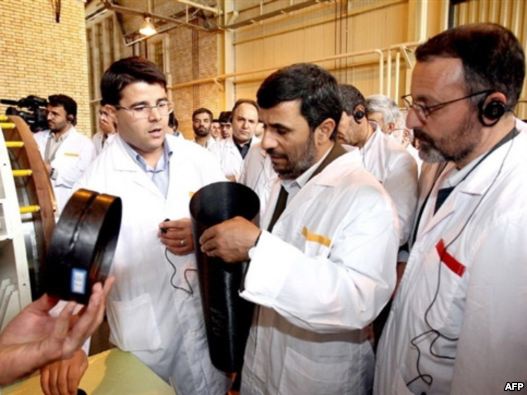 The UN atomic agency charges in a new report on Iran’s nuclear program that Tehran has worked on developing a nuclear weapon design and other research and testing relevant for such arms.

The International Atomic Energy Agency (IAEA) says in the leaked report by Director-General Yukiya Amano that it “has serious concerns regarding possible military dimensions to Iran’s nuclear program.”

Amano says “the information indicates that Iran has carried out activities relevant to the development of a nuclear explosive device.”

The report says that while some of the suspected secret nuclear work by Iran can have peaceful purposes, “others are specific to nuclear weapons.” The document says those activities may be continuing.

Signaling frustration at Iranian officials’ dealings so far on crucial topics, the report “requests” that Iran “engage substantively with the Agency without delay for the purpose of providing clarifications regarding possible military dimensions to Iran’s nuclear program.”

The report’s summary says that since “Iran is not providing the necessary cooperation, including by not implementing its Additional Protocol [to the Nuclear Nonproliferation Treaty], the Agency is unable to provide credible assurance about the absence of undeclared nuclear material and activities in Iran, and therefore to conclude that all nuclear material in Iran is in peaceful activities.”

Before the report was released, Iranian President Mahmud Ahmadinejad, speaking on Iranian state television, said Amano was just delivering “the papers that American officials hand to him.”

“I regret that they’ve placed a person on top of [the IAEA] who has no authority of his own,” Ahmadinejad said. “He even violates the agency’s rules. Some of the documents have been written by the Americans and have been handed to him. He’s just coming and talking all the time. [He should] publish a report on America as well and publish a report on America’s friends.”

Ahmadinejad reiterated Iran’s claim that it is not involved in making a nuclear weapon, and said it will not withdraw from peaceful nuclear activities.

The Russian Foreign Ministry expressed anger over the report, saying in a statement that it was adding to tensions in the standoff between world powers and Tehran.

The U.S. State Department said it needed time to study the new report, with spokeswoman Victoria Nuland initially declining to make any immediate comment on its contents.

Innocent Voices Speak Out: the impact of harassment and imprisonment of children of human rights act