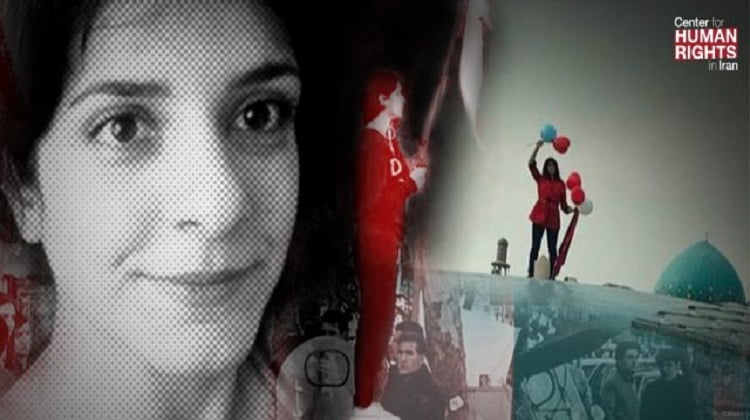 Eight months after she was arrested for peacefully protesting Iran’s compulsory hijab law, Vida Movahedi was released from prison on May 26, 2019, her lawyer announced.

“According to judicial authorities, the reduction of her punishment has been approved and she has been granted furlough,” attorney Payam Derafshan told the state-funded Islamic Republic News Agency (IRNA) on May 28. “The remainder of her [one-year] sentence has been forgiven.”

IRNA added: “According to Derafshan, his client had no intention of plotting anything and has said that she simply wanted to express a personal celebration, and in order to avoid any links with those who went abroad and tried to take political advantage of her personal action, she has always refused to express her views through foreign media outlets… So therefore the judge, taking into consideration that she’s the mother of a small child, decided to expedite her freedom…”

Detainees held in politically sensitive cases in Iran—as well as their family members—are often pressured and threatened by security agents or judicial authorities to avoid talking to media outlets.

At least 32 women have been arrested in Iran since 2018 and four women including Movahedi prosecuted for protesting Iran’s hijab law.

Compulsory hijab protesters Yasaman Aryani and her mother Monireh Arabshahi were both detained in early April 2019. Their statuses are unknown.

Movahedi was initially arrested on December 27, 2018, after she stood on a utility box on Revolution St. in Tehran, removed her headscarf, and waved it on a stick in an act of civil disobedience against Iran’s mandatory hijab law. Represented by now-imprisoned defense attorney Nasrin Sotoudeh, Movahedi was released the next day with a fine.

But pictures and video of her action went viral and she came to be known as the icon of a group of women who repeated her protest action. Throughout 2018, this group was referred to on social media networks with the hashtag, #girlsofrevolutionst.”

Movahedi repeated her protest action on October 23, 2018, waving her hijab along with balloons in her hand while standing on a dome in the middle of Revolution Sq. in Tehran.

Read the full article at iranhumanrights

A mysterious Iranian-run factory in Germany