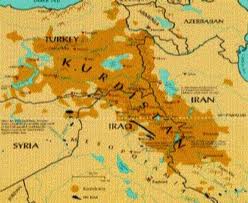 Iranian Kurds, like many ethnic minority groups, supported the 1979 revolution, and sought some form of autonomy in the nascent Islamic Republic. However, in August 1979, only six months after his return to Iran, Ayatollah Ruhollah Khomeini ordered the Iranian military and the newly-created Islamic Revolutionary Guards Corps (Sepah-e Pasdaran) to crush the Kurds and take control of the Kurdish regions in Northwestern Iran. For weeks, government forces waged a brutal campaign, surrounding towns with artillery and tanks, and bombing from the air. By the beginning of September, they controlled the major towns and the Kurdish fighters (peshmerga) had fled into the mountains from where they continued to wage a guerilla campaign.

As an added measure of terror, Khomeini dispatched his long-time comrade Ayatollah Sadegh Khalkhali to summarily try and order the executions of the so-called rebels. Khalkhali, as head of the newly-formed Islamic Revolutionary Court, was already known as “The Hanging Judge” due to his enthusiasm for holding summary trials and issuing execution orders, including one to the exiled Shah.

For several weeks in August and September, as government troops took control of towns in the Kurdish regions, Khalkhali and his deputies conducted trials of men, women and boys who had been arrested without warrants or charges. He and his deputies briefly questioned the prisoners before convicting them of crimes such as “corrupter on earth and at war with God and his prophet” before sending them to face a firing squad. The entire process usually took only a day and sometimes was completed in a matter of hours. While the total number of executions is unknown, it was reported at the time that as many as 80 people were executed in three weeks.

This report captures only one brutal episode among many that the Islamic Republic perpetrated in the Kurdish regions, as well as the rest of Iran. The battles and killings continued in the Kurdish regions, and eventually blossomed into a full-scale war that lasted for years. Iranian Kurds, as well as other ethnic minorities, continued to work to preserve their cultural and political rights, and the Islamic Republic continued to arrest, torture and imprison them.

While these events took place over 30 years ago, they are still relevant today as they turned out to be only a prelude to the Islamic Republic’s regular and persistent suppression of minority voices. The regime continues to violate the human, political and cultural rights of Kurds. Use of Kurdish languages in print and education is discouraged, and Kurdish student, political and civil activists are regularly arrested, detained and imprisoned. It has been reported that there are currently at least fifteen Kurds on death row for political offenses in the Islamic Republic.