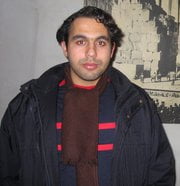 Amir Ali Allamehzadeh, journalist and former International Desk Editor of ILNA News Agency, remains in detention since his arrest by plainclothes forces 20 days ago. No security organization has yet accepted responsibility for his arrest. Allamehzadeh was arrested by three plainclothes forces at his father’s home in Tehran on Sunday, 18 September. Though judicial authorities have not revealed the detention location of the journalist, a source told the International Campaign for Human Rights in Iran that he is detained inside IRGC’s Ward 2-A at Evin Prison.

At the time of his arrest, plainclothes forces took several personal items belonging to Allamehzadeh and his family, including several computer hard disks, cell phones, and his handwritten notes. According to the source, the warrant presented at the time of Allamehzadeh’s arrest was issued by Branch 14 of the Government Employees and Media Court. This court is responsible for reviewing media crimes.

During the past 20 days, Allamehzadeh has only been allowed to contact his family once for under two minutes. According to sources close to the journalist, he suffers from spinal disk problems and his family is concerned about his health condition.

According to the source, the journalist’s family has been unable to visit with him, despite their repeated trips to Evin Prison. Considering Allamehzadeh’s warrant came from the Media Court, it appears that he was arrested for his journalistic activities.

IRGC’s Hezbollah, “Party of Allah” or “Party of Drugs”?