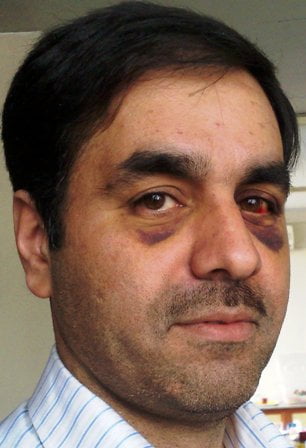 GVF — The image below shows Javad Salimi, the son-in-law of opposition leader Mir Hossein Mousavi after he was beaten up by security forces last Thursday during a funeral for Mousavi’s father Mir Esmail Mousavi.

On Thursday, security forces arrested at least seven people attending the funeral including Mousavi’s son-in-law and brother-in-law whose son Ali Mousavi was killed by state-hired assassins during opposition protests on 27 December 2009.

Mousavi’s website said Mir Esmaeil’s body was taken by officials in plainclothes to an ambulance as mourners had gathered in front of his house.

In addition, Mohammad Reza Nourollahian, a cleric and advisor to Mousavi, was also beaten up after he protested against the security forces’ interference in the procession and their violent mistreatment of mourners. He was detained but released days later on a heavy bail.

26 Kurdish Prisoners of Conscience on Hunger Strike in Rajai-Shahr

Four Azeri activists sentenced to one year in prison each