Narges-Mohammadi1-1-1-1In a desperate bid to gain permission to speak to her children on the phone, the prominent human rights activist Narges Mohammadi started a wet hunger strike on June 27, 2016. 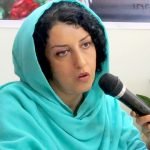 “I am asking for nothing other than being allowed to talk to my children on the phone. If this demand is too great, irrational, immoral, unlawful, or against national security, please let me know,” said Mohammadi in an open letter. “Convince me, please. Clarify why a mother, declared a criminal by the state, must be denied hearing the voices of her children.”

“Unlike other prisons in the country, the Women’s Ward in Evin Prison does not have a phone and inmates cannot contact their families. It’s prohibited,” she added. “Visitation is permitted once a week, but after that inmates have to wait for a whole week without any news.”

“While other mothers here are visited by their children, I imagine meeting my dear Kiana and Ali [who live in France] and smelling their small hands and kissing their lovely faces,” she said.

Political prisoners held in the Women’s Ward at Evin Prison are routinely denied proper medical care and hospitalization, face restricted or denied visitation rights even with their young children, are deprived of regular telephone contact with their families, and are not provided adequate nutrition, a recent report by the International Campaign for Human Rights in Iran has revealed.

In an interview with the Campaign, Mohammadi’s husband Taghi Rahmani questioned how phone calls between a mother and her children could be considered a “security threat” by the authorities.

“This ban can only mean one thing: they want to irritate her,” he said. “Narges is sick and she has to take 15 pills [every day] to control her illnesses. If something happens to her [during the hunger strike], the Judiciary and the Intelligence Ministry are responsible.”