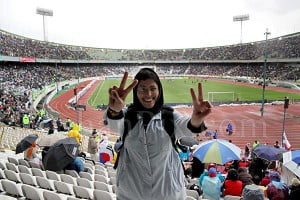 A source close to the family of photojournalist Maryam Majd told the International Campaign for Human Rights in Iran that she is having digestive problems. Majd has spent more than 20 days in solitary confinement in Evin Prison. ”Maryam is not in good physical condition and her family is extremely worried about her health. She has developed digestive and kidney problems, and for this reason, her mother wrote a letter to Tehran’s Prosecutor today, asking for care for her daughter. She is in a 2 square meter solitary cell inside Evin Prison and is not at all physically active — all of these are causes for her illness,” the source told the Campaign.

“After 12 days without any contact with her family, Maryam was able to have a booth visit with her family for a few minutes. Apparently, in that meeting she was not feeling well at all and was constantly crying, saying she wants to go home,” said the source, who spoke with the Campaign on condition of anonymity.

“Security forces searched and confiscated all her equipment and know she is not a security problem. When her family went to the judge, he told them that Maryam will be released soon. Her family is waiting for her release every day, and want Maryam to leave prison in good condition,” the source said.

Maryam Majd was arrested in her place of residence on 21 June, a day before a planned trip to Germany to photograph the 2011 FIFA Women’s World Cup. She is one of a few Iranian photographers who specializes in women’s sports. She is a member of the campaign to seek women’s attendance inside sports complexes, and also worked for the banned monthly magazine Zanan.