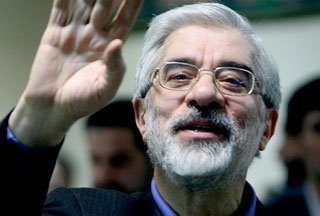 Mousavi, a former prime minister who served under the founder of the Islamic Revolution, was considered as Ayatollah Khomeini’s political ‘scion.’ He suffered a crushing defeat in the June 12 presidential election, which he claims was ‘fraudulent.’
A senior official with Iran’s Islamic Revolution Guards Corps (IRGC) believes the prosecution of opposition leader Mir-Hossein Mousavi would put an end to the country’s post-election turmoil.

Brigadier General Yadollah Javani, head of the IRGC’s political bureau, said Thursday that the opposition is responsible for the “blow that has been dealt to the prestige of the establishment.”

Following the presidential election in June, Iran witnessed an outpouring of anger by supporters of defeated presidential candidates Mousavi and Mehdi Karroubi, who took to the streets to protests the official results which saw the re-election of Mahmoud Ahmadinejad with a massive margin.

Mousavi and Karroubi claimed “fraud” in the poll and asked for its annulment. The electoral body, however, disputed all allegations and verified the results.

The opposition demonstrations provoked a government crackdown, in which at least 30 people were killed. Officials blamed foreign agents for the unrest and accused opposition figures of plotting to topple the establishment in a “velvet coup.”

“The question is who were the main plotters and agents of this coup. What is the role of (former President Mohammad) Khatami, Mousavi and Karroubi in this coup?” General Javani queried last week.

On Thursday, he expounded on the issue and said the leaders of the reform movement, particularly Khatami, had “easily conveyed a message to the enemy” that they were after “change” in the establishment.

“The enemy realized that Khatami is a secularist even though he is a cleric, speaks of [the founder of the Islamic Revolution Ayatollah Rouhollah] Khomeini, and is in contact with his family,” the Iranian Labor News Agency quoted Brig. Gen. Javani as saying.

The senior commander went on to say that the reform movement does not abide by the religious system, and not only it offers no help to the establishment, “it always seeks to inflict damage on it.”

In an allusion to remarks by senior cleric and official Ayatollah Akbar Hashemi-Rafsanjani who said the trust of the people had been shattered in the establishment, the IRGC general said the opposition is to blame for it.

Iran has put some 200 opposition icons, protesters as well as journalists and foreigners, who have been alleged to have carried out acts of espionage during the post-vote unrest, on trial as the authorities attempt to quash the turmoil that has spread across the country and opened a divide within the ruling elite.

General Javani, meanwhile, believes that only the trial of opposition’s leaders, particularly Mousavi, would put an end to the crisis.

“This flame of sedition cannot be put out unless through clarifying and trying the real elements (of the movement),” said the general. “Mousavi should stand before the court to be enlightened.”