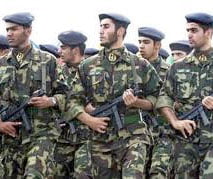 In his latest remarks, the head of Iran’s military police who had earlier warned of “differences and divisions” within the armed forces, called on “alertness and protection” of the Revolutionary Guards (IRGC) members and asked the authorities of the force to not allow “infiltrators to get into the Guards Corps.”

supreme leader involved in the work of selecting new recruits in the IRGC, cleric Mohammad Kazem Bahrami said, “The importance of the IRGC is such that the slightest violation or injustice can produce unacceptable consequences. It is important to prevent infiltrations inside the body of the force.”

In his remarks, he noted that “prevention of harm” and “battling mishaps” in a force such as the IRGC were absolutely necessary and stressed that “in addition to prevention, we must also be alert on issues inside the Guards. Good cultural work has been done in the force and this acts as an internal control.”

Last February too, speaking at a seminar titled “Protection and Intelligence” for judiciary managers in the armed forces Bahrami had said that “differences and division” were among the most important issues that could harm the armed forces. “Espionage and overthrow are not the only issues that can harm the security of the country. Differences most certainly have destructive consequences,” he had said.

The program to “monitor and approve” the members of the IRGC has been regularly pursued in recent years by representatives of ayatollah Khamenei in the force and the coordination deputy of the Guards, as the organization has evolved.

General Mohammad Hossein Sepehr, the IRGC deputy for coordination whose job is to coordinate the activities of the representatives of the supreme leader in the IRGC had also earlier said, “The IRGC, soldiers and Basiji members must be trained in such a manner that they remain immune to the threats that they may face,” remarks that indicate the presence of the problem at the force and the need for this to be emphasized and focused.

Among the changes witnessed in the IRGC in recent years, particularly after the disputed and crisis ridden presidential elections of 2009 is the replacement of the older and some disgruntled members of the force with younger blood which came about on direct orders of ayatollah Khamenei and was pursued by the force’s commanders and his representatives.

Abbasali Dehghan, the ayatollah Khamenei representative in the IRGC who is responsible for recruitments in the force described the new features of the Guards about two weeks ago. “As the respected gentleman (ayatollah Khamenei) has delicately said, the best characteristics of a member of the force are having a strong faith, courage, the readiness to be martyred, a strong spiritual base, the ability to identify the enemy, intelligence, wisdom and having a Basiji and revolutionary outlook, discipline, activism in the revolution, belonging to a good family, accepting the leadership of the clerics, possessing a military attitude, speed, readiness to perform jihad and absolute defense, … . These are also our recruiting criteria for people into the force,” he said.

Concerns about differences among the members of the IRGC and infiltrations inside the force, and consequently calls for better recruitment practices and standards by representatives of ayatollah Khamenei in the force, are being pursued as more signs have emerged indicating differences of opinion in the cadre and even commanders of the force at various levels and among Basijis, including some retired commanders.

A large portion of the body of the IRGC is made up of people who joined the force when Mir-Hossein Mousavi’s was Prime Minister (in the eighties). Many of the old guard in the force enjoy good ties with Hashemi Rafsanjani, who at the time was the Speaker of the Majlis and in charge of the 8-year war with Iraq and also with Mehdi Karoubi who headed the Bonyad Shahid martyrs foundation on orders of ayatollah Khomeini. This contrasts with the situation after the 2009 presidential election fiasco when the commanders of the IRGC called Mousavi and Karoubi counter-revolutionaries and even attacked Rafsanjani and labeled him to be a fifth column opponent.

Knowledge of these problems of the IRGC over the recent years have found their way outside this key military force in the Islamic republic, an organization that some representatives of ayatollah Khamenei in the force have said is now the only group that stands firm behind the supreme leader of the country.