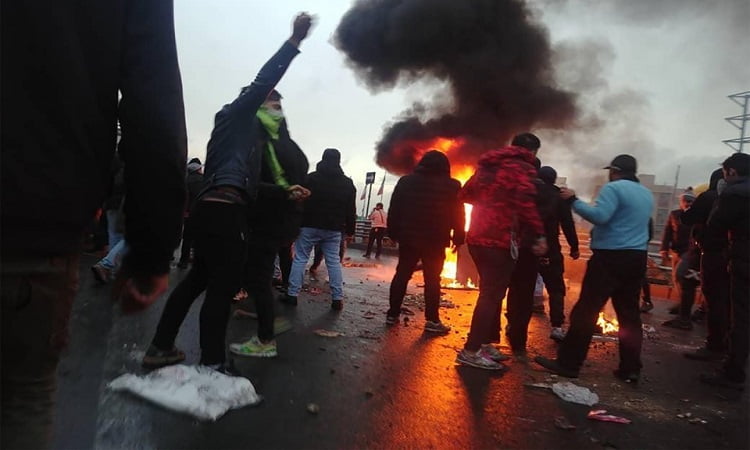 Amid Severe News, Internet Blackout, Fears Of A Harsh Crackdown In Iran

Amid Severe News, Internet Blackout, Fears Of A Harsh Crackdown In Iran

Reports about the number of casualties and arrests in Iran’s protests have been rising since Saturday night, amidst the most widespread news blackout in the country in 40 years.

Revolution Is On In Iran, Security Forces Fire On Protesters

Tens of people were reportedly killed in two days of protests in Iran while in places such as Shahryar in the vicinity of Tehran at least one was killed and dozens are in hospital some in critical condition, local medical staff said before the Internet was cut off.

Meanwhile, hundreds of protestors have been arrested in the central Iranian city of Yazd, Iranian authorities said.

Authorities began to warn protesters Saturday afternoon that they were ready to use force, as Supreme Laeader Ali Khamenei called demonstrators “bandits”.

Because of the news and internet blackout it is not clear if protests continue with the same ferocity at midday Sunday. But reports indicate there was unrest in Tabriz University and the bazaar in Tehran was on strike. Some reports from Esfahan indicated protesters are preparing to come out in late afternoon.

In another development, in his first reaction to the protests, Supreme Leader Ali Khamenei Sunday morning expressed support for the price rise and called the demonstrators “thugs”.

Meanwhile, Khamenei attempted to distance himself from the decision by saying in a tweet that he is not an expert on oil price and that he has relied on and will support the decision made by the heads of the three branches of the government, i.e., President Hassan Rouhani, Majles Speaker Ali Larijani and Judiciary Chief Ebrahim Reesi.

Reports on social media received before the blackout said in many places protesters burned pictures of Khamenei. Also, on Saturday, several bank branches were set on fire in Eslam Shahr, Behbahan, Esfahan and in Tehran suburbs.

The news blackout imposed by the Iranian government has been so widespread that only a handful of tweets originating from Iran have been observed Saturday morning. Internet on cell phones has been totally cut off although some living in border areas have been using SIM cards from neighboring countries to connect to the world.

The blackout even affected Iranian news agencies whose websites are inaccessible or too slow. Even the IRGC-linked Tasnim news agency has been extremely slow in updating its stories.