Interview with Parents of Two Brothers Sentenced to Die Today

Posted By: crazydeadon: May 16, 2011In: Executions, Human Rights
Print Email 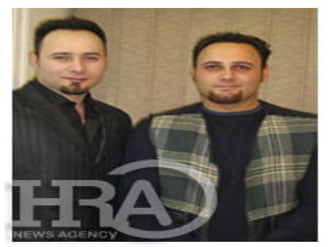 HRANA News Agency – The Islamic Republic’s judicial officials have reached a decision to hang two brothers, Mohammad and Abdullah Fathi, in Esfahan prison in a few hours at dawn on Tuesday, May 16, 2011.  These two brothers have been charged with the crime known as Moharebeh [Waging War Against God] through armed robbery and organizing an illegal group against the Islamic Republic regime.

Beijan Fathi, the father of two brothers on death row, in an interview with a HRANA reporter said, “Moharebeh means fighting against God and the Islamic regime.  My sons have nothing to fight over with God or the Islamic regime.”

On March 28, 2010, seven individuals were arrested by law enforcement officers in Chalus (Mazandaran Province) and were subsequently transferred to Esfahan.  These seven individuals have been identified to be Mohammad and Abdullah Fathi (son of Bijan), Davood Jamshidian (son of Mohammad Reza), Saied Javanmardi (son of Yadollah), Mohsen Goudarzi (son of Lotfollah), Daniel Amiryavary (son of Mohammad Reza), and Ibrahim Javanmardi (son of Reza).

Judge Moghazi presided over Esfahan’s Revolutionary Court, Branch 24, in a trial which lasted two hours and sentenced the aforementioned individuals to death.  After the cases were referred to the higher court, the Supreme Court judges announced that the maximum penalty for each individual should have been seven to fifteen years in prison.  Accordingly, the death sentences for five of these individuals were repealed.  However, Mohammad and Abdullah Fathi’s punishment was not reversed and their family was notified by the officials who said, “The order has come from the above that these two must be executed.”

Mentioning that he was politically active and his sons’ uncle was sentenced to die in the 80’s, Bijan Fathi called his sons’ death sentences settling a personal account and told HRANA, “My sons’ fate is similar to that of those individuals who were executed because they visited Camp Ashraf in Iraq.”

Bijan Fathi pointed out that their home was near the front lines during the Iran-Iraq war in the 80’s and mentioned, “My sons suffered from neurological disorders because of bombings and explosions. Mohammed developed stuttering, and Abdullah didn’t begin talking until he was three years old.  From 1986, they were receiving psychological counseling and treatment, and four years ago, their treatment began again.  The records are still kept by their doctor.  Consequently, they either aren’t capable of committing such crimes or are not in control of their actions.  My sons’ medical records have been sent to the court, but unfortunately, no one has bothered to conduct an investigation by referring the records to the medical examiner.  They have just said that they want to execute these two individuals.”

Bijan Fathi in reply to the question asked by HRANA reporter to find out why his sons’ arrests and execution sentences were not publicized said, “Since the officials and the attorney had promised my wife that the sentences would be reversed, my wife didn’t agree to let everyone know.  My hands were tied. As a matter of face, after the Supreme Court’s ruling which was issued a month ago, we were going to do just that, but this morning, we were notified that the sentence will be carried out tomorrow.”

Bijan Fathi at the end added that similar to all other young people, his sons were politically active in election campaigns and participated in observing traditional Persian holidays and celebrations including Chaharshanbe Suri [ancient Iranian festival of fire].  Bijan Fathi again explained that regardless of all of such things, the sentences were issued to settle an old, personal account.

In an interview with Human Rights Activists News Agency (HRANA), Mohammad and Abdullah Fathi’s mother answered our questions despite her mental distress and anguish.  The complete text of the interview appears below:

HRANA: Ms. Fathi, the media has reported that your sons will be executed.  Is this news accurate?

Ms. Fathi: Yes, this morning, the prison officials from ward A-T in Esfahan prison contacted us and asked whether anyone had spoken with us last night.  I replied no, and then they informed me that my sons’ death sentence would be carried out tomorrow.  At the end of the call, they asked me to go to the prison to see my sons for the last time.  Thirty minutes later, they contacted me again and changed the time set for my visit.  They called again for the third time to tell me that there would be no visits today, and I must go to prison tomorrow morning at 6:00am.  I asked, “Why 6:00am?”   They answered, “Please come.  No problem.”  Being worry and upset, I went to the prison, but no matter how much I begged, no one answered my pleas.  No matter how much I cried and said, “These are my children,” no one paid any attention.  Prison officials told me that they were ordered not to allow these two prisoners to have any visitors.

HRANA: Have your children been presented by an attorney during this trial?  If yes, has he been notified that the death sentence will be carried out tomorrow?

Ms. Fathi:  No one including the attorney, my sons and I were told that the sentence will be carried out. The written notice for the execution has not been given to the attorney either.  Their excuse for not notifying us has been that because of security considerations, there is no need for us or the attorney to be notified about the content and details of each case.

HRANA: What efforts have been made to stop this execution?

Ms. Fathi: We have gone everywhere including to the Sentence Enforcement Unit and the Pardon and Amnesty Commission.  No matter where we’ve gone, the answer has been negative, and no one has showed us the verdict.  I said, “Do I have the right or not to know for what crime my sons are being executed?”  This is where I stand…

My sons’ attorney is Mr. Ahad Dehnavi who was the counsel of record superficially for a year.  However, in the past year, not only the court hasn’t recognized him as my sons’ counsel, the authorities haven’t allowed him to do anything even after the ruling by the Supreme Court.  He was also present in court but wasn’t permitted to defend his clients.  No one read my sons’ medical record.  The judge even didn’t know that one of my sons was married.  The existing records from the lower court show this fact.  To make a long story short, the verdict was predetermined…

HRANA:  Have you visited your sons in the last few days?

Ms. Fathi:  Before they were transferred to ward A-T of Dastgerd prison in January 2011, we weren’t allowed any visits for six months.  Afterwards, they allowed booth visits once a month, but since my sons are taken to solitary confinement once in a while, prison visits are cancelled.  For example, they were in solitary confinement all of the month of Ramadan.  Under such circumstances, I still went to prison to see them.  Once the warden interfered, and brought them out of the solitary confinement so that I can see them.

The majority of prison officials were in shock when notified about the sentence.  They couldn’t believe that such a verdict was issued and helped us to write pardon and clemency requests.