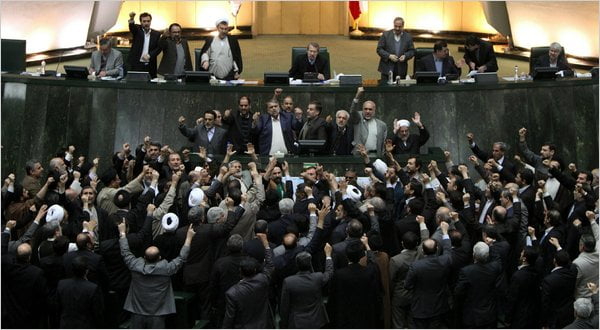 The Iranian government threatened opposition leaders with execution and made a fresh wave of arrests, a day after the largest protests in a year prompted clashes in which at least two people were killed and dozens injured.

Tehran and other Iranian cities quieted down on Tuesday as the opposition regrouped and assessed the impact of the rallies that brought tens of thousands of people into the streets across the country.

The protesters, buoyed by activism across the Middle East, were confronted forcefully by police and antiriot forces, which used guns, tear gas and electric prods to disperse them. The demonstrators had called for Supreme Leader Ayatollah Ali Khamenei to step down.

Two college students in their 20s, Sanah Jaleh and Mohamad Mokharti, were killed by gunshots, said the government and opposition. Dozens of people were injured and 1,500 people have been arrested in connection with the demonstrations, the government and protestors said.

Mr. Mokharti’s last Facebook message on Monday morning, hours before he joined the protests, was “Happy Valentine’s Day,” next to the green ribbon that symbolizes the opposition.

Antigovernment activists said they planned to attend a funeral procession on Wednesday morning for Mr. Jaleh, who was a student activist as part of the pro-democracy Islamic Student Union and part of the minority Sunni Kurd community, his friends said on the student website Daneshjoo.

The funeral, which will take place in front of Tehran University, could become the next flashpoint between pro-government forces and the opposition. “We will not allow them to kill us and then shamelessly take advantage of our martyrs,” said a student activist from Tehran.

Mr. Jaleh’s friends said he was shot dead Monday by a member of Basij, a volunteer plainclothes militia. In his honor, students waved green banners at the campus of Tehran University, videos show.

Paradoxically, the government cast Mr. Jaleh as a Basij militiaman. The opposition tried to discredit that claim by circulating on websites and blogs a picture of Mr. Jaleh with the late reformist Islamic cleric Ayatollah Hossein Ali Montazeri, a spiritual guide for opposition Green Movement.

In the U.S., President Barack Obama spoke on Tuesday in support of the protesters in Iran and condemned the violence.

“I find it ironic that you’ve got the Iranian regime pretending to celebrate what happened in Egypt, when in fact they have acted in direct contrast to what happened in Egypt by gunning down and beating people who were trying to express themselves peacefully,” Mr. Obama said at a White House news conference.

But Mr. Obama, whose administration has pushed for economic sanctions against Iran over its nuclear program, said the U.S. “cannot ultimately dictate what happens inside of Iran.”

It was too early to say whether the protests will gain momentum, analysts said. But Iran’s leaders—who claimed they had quashed the movement that brought hundreds of thousands to the streets in 2009 and early 2010 to protest what they said was a flawed election that unfairly returned President Mahmoud Ahmadinejad to office—seemed shaken by the rallies on Monday.

Mr. Ahmadinejad on Tuesday blamed the protests a day earlier on “enemies” of the government.

Ali Larijani, speaker of the parliament, on Tuesday accused the U.S. for fomenting the protests and said the legislative body must quickly form a panel “to investigate the antirevolutionary movement” brewing in Iran. The session turned rowdy when a group of hard-line conservatives began pumping their fists in the air and shouting that prominent opposition figures Mir Hossein Mousavi and Mehdi Karroubi “must be executed.”

The two men have been under house arrest since Friday and were unable to attend the demonstrations, but had called for supporters to take to the streets Monday in solidarity with the movements in Egypt and Tunisia that had deposed their own leaders.

Mousavi adviser Ardeshir Amir Arjemand said the opposition wasn’t surprised at the government’s reaction to Monday’s protests. “Their violence and brutal crackdowns against the public are not up for dispute, these officials have to be held accountable,” he said, according to the website Kalame.

Another labour activist arrested in Tehran

Iran cuts down to six weeks timeline for weapons-grade uranium