IRAN’s “significant” threat to stability in the Middle East should not be under-estimated – while Israel’s deep commitment to “rolling back” the Islamic Republic’s influence in Syria and elsewhere mean tensions between the two countries are unlikely to recede any time soon, an Israeli-based expert has said. 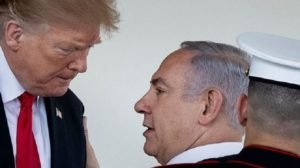 And Brigadier general Assaf Orion, of Israel-based think tank the Institute for National Security Studies (INSS), has said Israel will face “serious choices” in the future when it comes to containing the threat posed by militants based in Gaza. Tensions between the two nations threatened to boil over last month after a rocket attack on Tel Aviv resulted in the injury of seven people after it hit a house owned by British-Israelis Robert and Susan Wolf. The attack, which was launched from the Rafah area in Gaza was later blamed on Hamas, and Israeli’s Prime Minister Benjamin Netanyahu responded by ordering an missile attack of its own on Hamas positions.

The exchange is the latest chapter in an increasingly tense stand-off, with Iran furious at Mr Netanyahu’s role in persuading US President Donald Trump to pull the US out of the landmark Joint Plan of Comprehensive Action (JPCOA) deal aimed at preventing Tehran from acquiring nuclear weapons.

Iran has stepped up its rhetoric is recent months, with senior military commander Yadollah Javani saying his country would “raze Tel Aviv to the ground” if the United States launched an attack, and Mr Netanyahu responding by warning Iran not to “test Israel’s resolve”.

“Iran is perceived as a threat as it both vowed to destroy Israel and is consistently devoting efforts to promote this goal.

On 3rd of January a news spread in social media regarding Qasem Soleimani and AbuMahdi Mohandes who has died by a US drone strike near Baghdad Airport and this was the end of their lives. In social media, especially Iranian users, there was a chaotic situation, some called of “the general of... END_OF_DOCUMENT_TOKEN_TO_BE_REPLACED