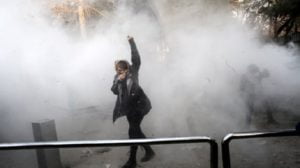 Iranian authorities arrested more than 7,000 dissidents last year in a sweeping crackdown that led to hundreds being jailed or flogged, at least 26 protesters being killed, and nine people dying in custody amid suspicious circumstances, according to Amnesty International.

Those rounded up during violent dispersals of peaceful protests in what Amnesty called “a year of shame for Iran” included journalists, lawyers, minority rights activists and women who protested against being forced to wear headscarves.

“2018 will go down in history as a year of shame for Iran,” said Philip Luther, Amnesty International’s Middle East research and advocacy director. “The staggering scale of arrests, imprisonments and flogging sentences reveal the extreme lengths the authorities have gone to in order to suppress peaceful dissent.

“From underpaid teachers to factory workers struggling to feed their families, those who have dared to demand their rights in Iran today have paid a heavy price. Throughout 2018, the Iranian authorities waged a particularly sinister crackdown against women’s rights defenders. Governments which are engaged in dialogue with Iran must not stay silent while the net of repression rapidly widens.”

At least 112 women human rights defenders were arrested or remained in detention in Iran last year following sustained protests against compulsory veiling. Women silently waved their headscarves on sticks in public, provoking a violent response and a number of “grossly unfair” trials that led to some being jailed…

Angela Merkel: Israel has 'right' to defend itself against Iran in Syria Upcoming Mideast Conference in Warsaw Not Aimed at Demonizing Iran, U.S. Says

On 3rd of January a news spread in social media regarding Qasem Soleimani and AbuMahdi Mohandes who has died by a US drone strike near Baghdad Airport and this was the end of their lives. In social media, especially Iranian users, there was a chaotic situation, some called of “the general of... END_OF_DOCUMENT_TOKEN_TO_BE_REPLACED