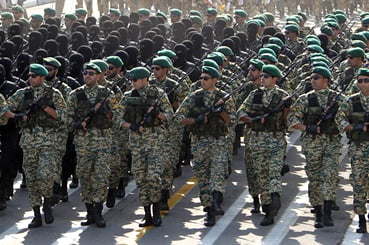 Iran Behind Iraq’s Shiite Militias – A special report in Reuters today (.pdf) documents the extensive ties three leading Iraqi Shiite militias—Asaib Ahl al-Haq, the Badr Brigades, and Kataib Hezbollah—have with Iran. Reuters describe the militias as being “instrumental” in the fight against the Islamic State of Iraq and Syria (ISIS). Aside from bordering Iraq, “Iran’s population is overwhelmingly Shi’ite, as are the majority of Iraqis.”

The Reuters report prominently details the battle over the Iraqi city of Amerli this past summer.

One of the biggest rallying points in recent months was Amerli, an Iraqi town of some 15,000 Shi’ites, which was besieged by IS for two months. Most residents there are Turkmen, not Arabs, but that did not change the symbolism of the conflict for Shi’ites. Graffiti sprayed outside the town in August read “Amerli is the Karbala of the age” – a reference to a seventh century battle that is a defining moment for Shi’ites.

Iran helped train Kataib fighters in the use of AK-47 assault rifles, heavy machine guns, mortars, rockets and IEDs, according to Abu Abdullah, the Kataib commander. Kataib fighters also used a camera-equipped drone to gather information on IS positions. A Reuters reporter met two men who spoke Farsi, the language of Iran, accompanying Asaib fighters during the battle. A third man said he had come from Iran to train police. …

The importance of the battle for Iran was underscored when photographs and videos surfaced on the Internet that allegedly showed Revolutionary Guard commander [Qassem] Soleimani in the town.

Reuters quotes an Iraqi official who describes Soleimani as “an operational leader” who “goes to the front to inspect the troops and see the fighting.” According to the official, Soleimani reports directly to Iran’s Supreme Leader Ayatollah Ali Khamenei, so when “[h]e needs money, gets money. Needs munitions, gets munitions. Needs materiel, gets materiel.”

Soleimani, the commander of Iran’s Islamic Revolutionary Guard Corps, has previously been credited with coordinating “between Iran and pro-Assad forces” and last year was said to be “the main political force in Syria.”

The Reuters report also observes that Iran models its interactions with the Iraqi Shiite militias on the way it interacts with Hezbollah in Lebanon, where the group operates “as both a military outfit and political party,” and “has grown to become the most powerful force in Lebanon.”

Hezbollah’s domination of Lebanese politics, including preventing the selection of a new president, has recently earned the Iranian-backed terror organization criticismfor working against Lebanon’s national interests.

Similarly, last week the Arab media reported that Iran had created a “new Hezbollah” in Syria, uniting Shiite militias there to fight alongside the army of President Bashar al-Assad.

The Shi’ite militias, according to Reuters, “have certainly fuelled sectarian violence.” Recent reports have called them “just as brutal” as ISIS.