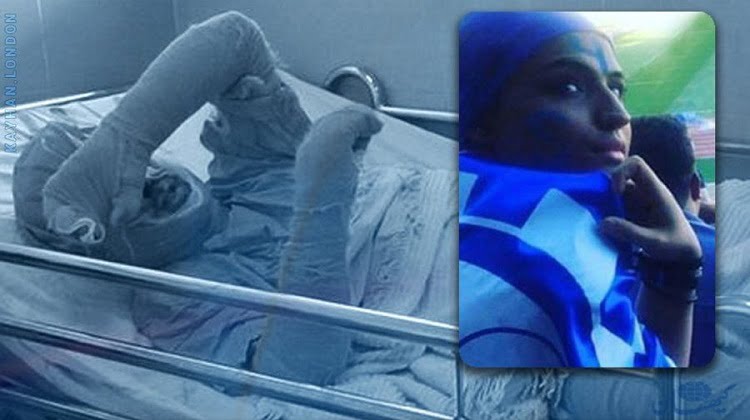 The young woman known as the Iran “blue girl” has died from the wounds she suffered after setting herself on fire because she was forced to stand trial for trying to enter a soccer stadium disguised as a man. Iran bans women from entering soccer stadiums.

According to the BBC, the blue girl’s death was revealed on September 10, 2019. She came to be known by that moniker on the Internet because blue is the color of her favorite soccer team, called Esteqlal of Tehran. However, Fox News gave her real name as Sahar Khodayari.

“All people, including women in #Iran, have the right to enjoy the beautiful game. @FIFAcom must uphold its statutes against discrimination and follow through on its call for Iran to lift its ban on women in stadiums. Football stars/fans, please speak up for #Iran’s #blue_girl,” wrote Iran Human Rights.org on Twitter.

Here’s what you need to know:

1. The Iran ‘Blue Girl’ Set Herself on Fire Outside the Courthouse

The details of why the blue girl set herself on fire were described by BBC. The British news site reported that her act came after she heard that she could face six months to two years in prison for trying to enter the stadium.

Khodayari was facing a trial, which had been briefly postponed. She was released on bail after being held in jail for three days, according to BBC.

The blue girl’s death was confirmed by Shafaghna news agency. Amnesty International explained that, in March 2019, “in defiance of Iran’s ban on women entering football stadiums, 29-year-old Sahar Khodayari dressed as a man and attempted to enter Iran’s national football stadium in Tehran to watch a match between her favourite football team, Esteghlal of Iran, and Al-Ain of the United Arab Emirates, during the AFC Asian Cup.”

Read the full article at: Heavy