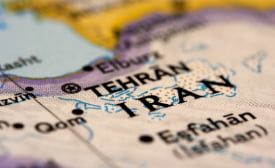 According to Onenewsnow IranIranian Revolutionary Guard Corps (IRGC) Lieutenant Commander Hossein Salami made it quite clear to the world that he believes Iran is about to give the world a big surprise.

“The [Islamic] revolution has changed the balance of power to such an extent that no security and political equation in the Muslim world is possible without winning Iran’s satisfaction,” Salami told the Fars news agency.

The lieutenant commander went on to express that Iran’s Muslim allies around the world are no longer “stretching out a red carpet” for American officials. 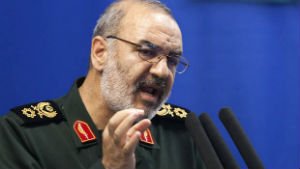 One recent example of this, according to Salami, took place when President Barack Obama was forced into a surprise/unannounced visit of U.S. soldiers at Afghanistan’s Bagram Air Field to celebrate Memorial Day weekend, when the commander-in-chief told them their nation’s longest war would end before the year’s close.

Salami stressed that while Iran is growing in power and influence among Muslims, the presence of U.S. troops in Islamic nations across the globe is declining as its foothold in these areas is weakening.

The Muslim military leader also sent out a warning to those getting in Iran’s way. “Any enemy plot will entail an unexpected ending for him and this is due to the Iranian nation’s reliance on religious and Islamic beliefs,” Salami warned.

The brigadier general attributes part of Iran’s growing threat to its recent technological advances in its military that he says are top-secret and will “remain confidential.”

Hossein Salami (IRGC)According to Salami (left), the Iranian Revolutionary Guards’ new “unlimited range” drones and air missile defense system that replaces the S-300 system, which it was formerly slated to purchase from Russia, is more advanced than anything on the planet.

“[It is] an air defense system more advanced than what they didn’t supply to us, due to their strategic interests,” Salami told Iran’s state-run media, saying it has “pinpoint precision capability when fired at mobile targets.”

His boast was an attempt to put Iran’s military might in perspective.

“This might be impossible in terms of science, but it is true and, in addition to us, only the Russians might possess this technology and even the Americans do not have it,” Salami continued.

Salami claims that above Iran’s new missile defense system, complete with drones, the IRGC’s new missiles are capable of high-altitude missions “without being limited in range.” He emphasizes that these enhancements are taking his forces over the top.

“[The Iranian Revolutionary Guards] stand atop the world, given its hundreds of martyrdom-seeking battalions and hundreds of highly trained combat battalions,” the commander expressed.

“Islamic revolution is not confined to Iran’s borders,” Jafari proclaimed in a recent press conference. He asserted that Iran must retaliate against “Satanic crimes “perpetrated by the United States and Israel.

He stressed that the battlefield stretches beyond Iran’s borders when it comes to jihad.

“Syria will turn into a more dangerous and deadly battlefield than the Vietnam War, and in fact, Syria will become the second Vietnam for the United States,” Jafari said weeks ago, promising that a military attack led by the U.S. against Syria would result in Israel’s “imminent destruction.”

Piling up the warnings, Iranian Supreme Leader Ayatollah Ali Khamenei sent a message to the U.S. last week that Iran is not intimidated by Western threats and that America’s diminishing global influence is being supplanted by Iran’s expanding reach. He maintains that the U.S. peacekeeping attempts are little less than a ruse for global dominance.

“Today the pretext [for Western pressure] is the nuclear issue, another day it is human rights, and some other time, it will be something else,” Khamenei said.

He says Iran is continuing to garner global support to impede the “imperialist” motivations of the U.S. Khamenei fuels this with the allegation that America’s endeavors to curb Iran’s nuclear program are just another excuse the West uses to try and “bully” the Islamic Republic, but he insists that the U.S. will succumb in the end.