Iran is conducting construction work on a crossing on the Syrian-Iraqi border to facilitate weapons smuggling from Tehran to its terror proxies across the Middle East, satellite images released by Fox News show. 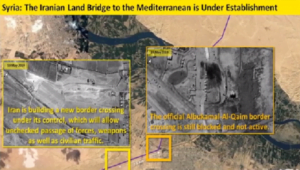 According to ISI’s assessment, “Without Syrian supervision, Iranian allies in Lebanon and Syria such as Hezbollah get a logistic channel, run by the Shi’ite militias and Iran.” The company added that, “The foundation is part of the Iranian effort to establish the 1,200 km.-length land bridge from Tehran to the Mediterranean.”

The old border crossing in the same area, known as Albukamal, was destroyed in an Israeli airstrike last year. Experts believe the Iranians are planning to use the new land bridge for smuggling operations, including trafficking weapons and oil, to avoid crippling U.S. sanctions.

U.S. Secretary of State Mike Pompeo spoke about the sanctions on Thursday, saying, “There’s a long history of Iranian terror that long predates our sanctions efforts, so this isn’t just about our sanctions, this is about the nature of this theocratic regime, these kleptocrats in Tehran.”

Iran has two central objectives in Syria: to further its regional ambitions in the Middle East and to transit weapons to the Iranian-controlled terrorist group Hezbollah in neighboring Lebanon, including thousands of missiles aimed at Israel.

Israel has long warned of Iranian efforts to establish a permanent military presence in Syria to create a second front from which Iran could threaten the Jewish State. In response, Israel has carried out hundreds of air strikes in Syria against Iranian military targets and advanced weapons deliveries to Hezbollah.