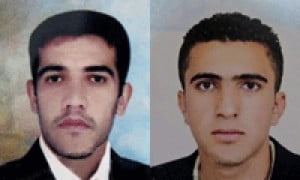 Iran Briefing: Zaniar Moradi and Loghman Moradi were arrested respectively on August 1, 2009, and October 17, 2009, by the intelligence forces of the Revolutionary Guard for allegedly murdering the son of a senior cleric in Marivan, Kurdistan province, north-eastern Iran, on July 4, 2009. They were forced by the Revolutionary Guard’s forces to make fake confessions.

Following their transfer to Rajaee Shahr Prison, the two detainees wrote a letter denying that they have had any connection with murder of the son of  Marivan’s Friday prayer Imam. They also said that they were under duress to make fake confessions on TV.

The two detainees are sentenced to death  by Branch 15 of the Tehran Revolutionary Court while there is no tangible evidence against them. Furthermore, they have also said that they were forced by the Revolutionary Guard’s forces to make fake confessions.

According to article 38 of the Constitution of the  Islamic Republic and article 578 of the Islamic Penal Code (IPC), the death sentences against Zaniar and Loghman Moradi should be immediately halted since no tangible evidence has been found against them,  and since the confessions have been extracted under torture.

Iran Briefing strongly condemns the death sentences against Zaniar and Loghman Moradi and calls upon the Iranian authorities to immediately halt the sentence.  It also calls upon all institutions involved with human rights activities, freedom seekers and intellectuals to interfere with the matter and force the Iranian authorities not to carry out the executions of Loghman Moradi and Zaniar Moradi.

IRGC-made militias the most dangerous of all Iran-backed groups