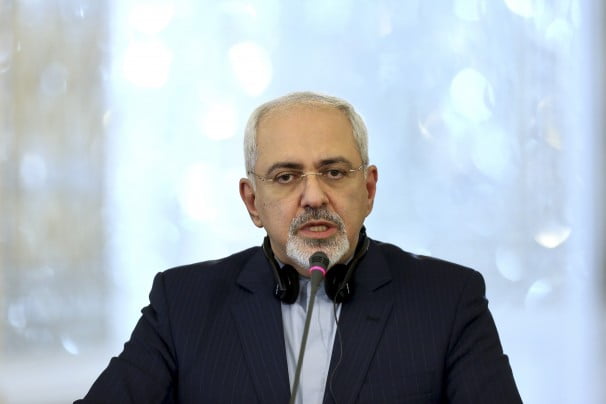 Iranian Foreign Minister Javad Zarif is on a diplomatic blitz to assert Iran's role in resolving the Syrian crisis ahead of the Geneva II peace talks. Via The Foreign Bureau, WSJ's global news update. Photo: AP

Iran committed to making a deal

Posted By: on: December 16, 2013In: Revolutionary
Print Email

TEHRANIranian Foreign Minister Mohammad Javad Zarif said that despite hitting a “snag” in nuclear negotiations last week, Iran is  committed “100 percent” to reaching a comprehensive final agreement. But he voiced tough positions on key issues and said “it’s going to be a bumpy road,” with difficult bargaining ahead.

Zarif, who is Iran’s top chief negotiator, outlined his views in an hour-long interview at the foreign ministry here Sunday. He said that his country would continue the talks, despite what he called the “extremely counterproductive” U.S. Treasury Department announcement last week ofnew steps to enforce existing sanctions.

Iranian concern was eased, Zarif said, after his contacts last week with Secretary of State John Kerry, Russian Foreign Minister Sergei Lavrov and the chief European Union negotiator, Lady Catherine Ashton. “What I have heard from Secretary Kerry and Lady Ashton is that they are committed to an early finalization of the Geneva process with a view to reaching a comprehensive agreement. I share that objective.”Dressed in a diplomat’s blue pinstripe suit and speaking fluent, American-educated English, Zarif presented Iran’s case on nuclear and regional issues. He was frank about his disagreements with leaders of the Iranian Revolutionary Guard Corps and said Iran was ready to play a more active role in ending the war in Syria and in providing greater security in the Persian Gulf.

Zarif, seen by critics as the leader of Iran’s “charm offensive,” has become the most visible international face of a regime seeking a deal that would end punishing economic sanctions. He helped negotiate the breakthrough interim agreement reached last month in Geneva to freeze Iran’s nuclear program for six months. He said that in a follow-on comprehensive agreement, Iran would affirm its commitment to a peaceful nuclear program. But he didn’t provide specific responses to administration concerns about activities the U.S. argues aren’t consistent with a civilian program.

On enrichment, for example, Zarif insisted that Iran could continue its domestic program with some limits and greater transparency. “We do not see any reason now that we have put so much time and effort in it, and brought [the West] to the point of abandoning the illusion of zero enrichment in Iran, why should we accept anything less.”

As for Iran’s heavy-water reactor at Arak that would produce plutonium that could be reprocessed as nuclear fuel, Zarif explained: “We cannot roll back the clock 20 years and ask Iran to simply get rid of a project that has been the subject of a great deal of human and materiel investment. However, there are various ways of making sure that this reactor will remain exclusively peaceful.”

Asked about a U.S. demand to close the enrichment facility at Fordow, built into a mountainside, Zarif said: “If you sit in Iran, and you see people having concerns about Fordow, the only conclusion you can draw is that they want to attack you.”

Zarif said he didn’t want to negotiate in public, and he argued that acceptable compromises could be found on such issues. But President Obama, pressed by Israel, has said he wouldreject an agreement that doesn’t reverse the Iranian program and ensure that it will be restricted to civilian uses only.

Zarif acknowledged his recent public dispute with Maj. Gen. Mohammad Ali Jafari, the head of the Iranian Revolutionary Guard Corps, about what Zarif said were Iran’s limited military capabilities. “I respect Gen. Jafari’s remarks, his views, and I expect him to have differences of views with me,” he said. He also noted that some hard-liners in Iran who oppose a deal with the West “have asked for my removal.”

But Zarif insisted that he and President Hassan Rouhani lead a consensual process in all areas of foreign policy, including regional issues such as Syria. “Iran believes there is no military solution for Syria,” Zarif said, noting that he is ready to attend a so-called Geneva 2conference to seek a political settlement, so long as there are no preconditions for the removal of President Bashar al-Assad.

“We’re living at a crossroad,” the Iranian foreign minister said. But he rejected former U.S. Secretary of State Henry Kissinger’s argument that Iran must become “a nation rather than a cause.” He argued that, like America, Iran wanted to press both its values and its interests. America isn’t alone in seeing itself as an “extraordinary nation,” Zarif said: “We do, too.”