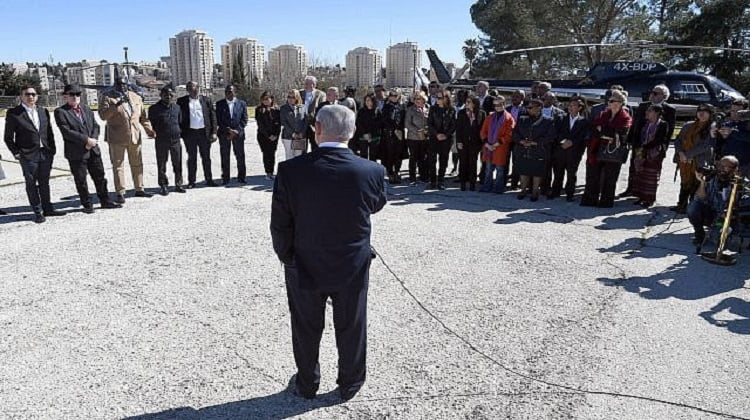 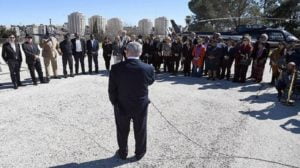 Netanyahu was briefing the delegation, headed by Israel’s UN envoy Danny Danon, just before they headed to Israel’s northern border to inspect one of Hezbollah’s cross-border attack tunnels.

“It’s important to send this very powerful message just as we stop the terror tunnels coming into Israel: We will stop all the aggression, from Lebanon or from Syria or from Iran itself,” Netanyahu said.

“We are committed to preventing this aggression, and in so doing we’re not only protecting Israel itself, but also protecting our neighbors and world peace.”

On Thursday, political factions in Lebanon ended a nine-month deadlock and agreed on a new government, which saw a strengthening of the Shiite terrorist group.

Hezbollah now holds two ministries and a ministry of state, including for the first time the Health Ministry, which has one of the country’s largest budgets. The Finance Ministry remains in the hands of a Hezbollah ally, Ali Hassan Khalil.

Speaking to the ambassadors outside his Jerusalem residence, Netanyahu lambasted the UN’s perceived anti-Israel bias, urging the diplomats to work toward improving their respective capitals’ voting pattern on Israel.

“The fact that you’re here represents the fairness and integrity of your approach. I wish that this characterized the UN,” he said. In 2018, the UN General Assembly passed 20 resolutions against Israel and only six against the rest of the world.

“It’s obviously absurd,” he said. “But the important thing is not only merely to see the truth, as you will during this visit, but also to speak the truth and, may I say, to vote the truth.”

Netanyahu agreed to host the ambassadors because he has a “non-hidden agenda,” he added.