Iran could produce enough weapon-grade uranium for one or more nuclear bombs by mid-2014, and the United States and its allies should intensify sanctions on Tehran before that point is reached, a report by a group of U.S. nonproliferation experts said. 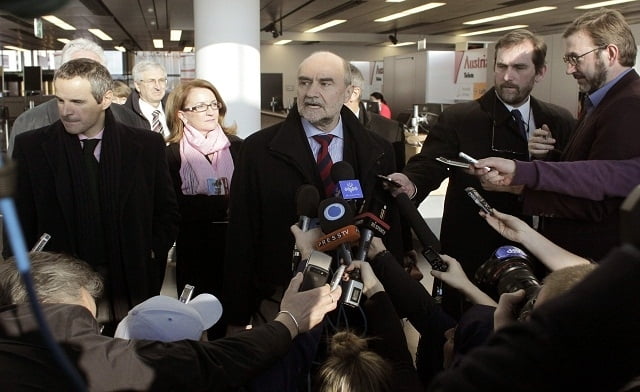 military action to prevent Iran from acquiring a nuclear weapon, the report said.

The U.N. nuclear watchdog, the International Atomic Energy Agency, has expressed concern that Iran’s nuclear program has a military dimension. Tehran, which says its nuclear program is for peaceful energy purposes, calls those allegations baseless.

The 154-page report, “U.S. Nonproliferation Strategy for the Changing Middle East,” produced by five nonproliferation experts, was expected to be released on Monday.

“Based on the current trajectory of Iran’s nuclear program, we estimate that Iran could reach critical capability in mid-2014,” the report said.

It defined “critical capability” as the point when Iran would be able to produce enough weapon-grade uranium for one or more bombs without detection by the West.

By mid-2014, Iran would have enough time to build a secret uranium-enrichment site or significantly increase the number of centrifuges for its nuclear program, said David Albright, one of the project’s co-chairs and president of the Institute for Science and International Security.

“We don’t think there is any secret enrichment plant making significant secret uranium enrichment right now,” he told Reuters. But there is “real worry” that Iran would build such a plant, he said.

The report recommends that the United States and its allies intensify sanctions pressure on Iran prior to that point because once Tehran acquires enough weapon-grade enriched uranium it would be “far more difficult to stop the program militarily.”

The report recommends that the U.S. government should announce its intention to use sanctions to impose a “de facto international embargo on all investments in, and trade with, Iran” if Tehran does not comply with U.N. Security Council resolutions.

It also recommends sending a “crystal clear” message to Iran’s leaders that U.S. military action would prevent them from succeeding in the pursuit of a nuclear weapon.

“The president should explicitly declare that he will use military force to destroy Iran’s nuclear program if Iran takes additional decisive steps toward producing a bomb,” the report said.

On the civil war in Syria, the report said that the U.S. government should emphasize to the opposition trying to oust President Bashar al-Assad that once it comes into power, it will have to work with the international community to destroy Assad’s chemical weapons stockpile.

Failure to do so would lead to sanctions and other measures at a time when a new government would need external assistance to consolidate control and develop the economy, the report said.

It also recommended stressing to the Assad government that it should destroy the chemical weapons rather than use them and face prosecution or have them fall into the hands of its opposition.

In addition to Albright, the other project co-chairs were Mark Dubowitz, executive director of The Foundation for the Defense of Democracies; Orde Kittrie, law professor at the Sandra Day O’Connor College of Law; Leonard Spector, deputy director of the James Martin Center for Nonproliferation Studies; and Michael Yaffe of the Near East, South Asia Center for Strategic Studies at the National Defense University. They were not representing their institutions in this project.

A Kurdish political prisoner from Salmas has been sentenced to death Student activist, Amir Chamani resident of Tabriz has been detained

On 3rd of January a news spread in social media regarding Qasem Soleimani and AbuMahdi Mohandes who has died by a US drone strike near Baghdad Airport and this was the end of their lives. In social media, especially Iranian users, there was a chaotic situation, some called of “the general of... END_OF_DOCUMENT_TOKEN_TO_BE_REPLACED