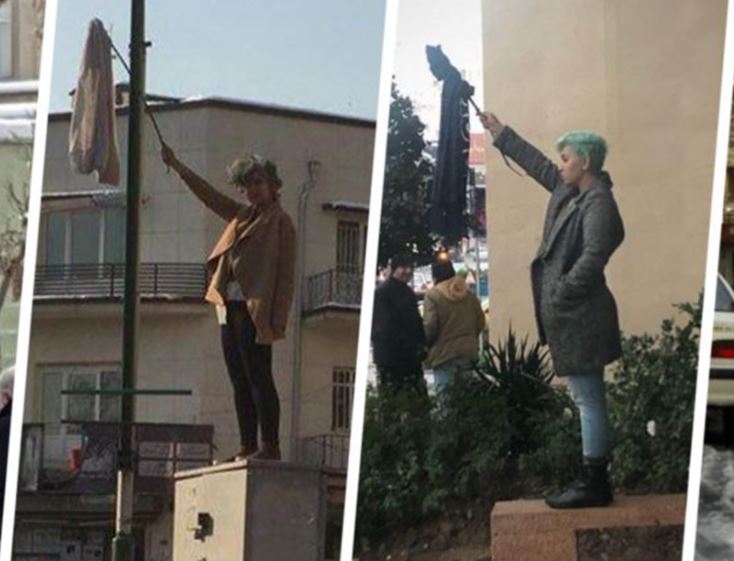 A warning by Iranian police that women could be jailed for up to a decade for joining protests against compulsory veiling has put dozens at immediate risk of unjust imprisonment and represents an alarming escalation of the authorities’ violent crackdown on women’s rights, said Amnesty International.

More than 35 women have been violently attacked and arrested in Tehran alone since December 2017 for taking part in ongoing peaceful protests against the discriminatory and abusive practice of compulsory veiling. In an official statement on 23 February, the police warned that women would now be charged with “inciting corruption and prostitution,” which carries a maximum sentence of 10 years in prison. One of the protestors, Narges Hosseini, was today put on trial before an Ershad (Moral Guidance) court in Tehran on charges that include this new charge.

“This is a deeply retrograde move by the Iranian authorities in their ongoing persecution of women who dare to speak out against compulsory veiling. It places many women at serious and immediate risk of unjust imprisonment while sending a chilling message to others to keep quiet while their rights are being violated,” said Magdalena Mughrabi, Deputy Director for the Middle East and North Africa at Amnesty International.

“In compelling women and girls to cover their hair, the Iranian authorities have violated women’s human rights in Iran for decades and also deeply hurt women’s dignity. Rather than threatening women with jail terms for claiming their human rights, the authorities should immediately abolish the discriminatory, abusive and degrading laws and practices of compulsory veiling.”

At least one other woman, Shaparak Shajarizadeh, has been informed that she faces the charge of “inciting corruption and prostitution”. She is currently held in solitary confinement in Shahr-e Rey prison in Varamin, near Tehran. Her lawyer has said that she was subjected to torture or other ill-treatment, including beatings, in Vozara detention centre in Tehran following her arrest and was also injected with an unidentified substance several times by force and against her will.

Other women arrested for peacefully protesting against compulsory veiling in recent weeks include Vida Movahed and Azam Jangravi, who are currently out on bail, and Maryam Shariatmadari and Hamraz Sadeghi who remain in detention.

The statement of the police coincides with a recent upturn in police brutality against women’s solo protests – which see women take off their headscarves in busy public places and silently wave them on the end of a stick while standing on top of raised structures.

On Thursday 22 February, a video went viral on Persian social media showing a police officer recklessly pushing Maryam Shariatmadari off a concrete structure on which she was standing without a headscarf. Her friends have reported that the fall resulted in injuries requiring surgery. She is held in Shahr-e Rey prison, without access to adequate medical care.

Amnesty International has also learned that Maryam Shariatmadari’s mother, Mitra Jamshidzadeh, was also detained on 23 February for about 30 hours in Vozara detention centre in Tehran. Her lawyer said that she was subjected to beatings after she tried to obtain information about her daughter’s whereabouts.

On Saturday 24 February, Hamraz Sadeghi, who was standing on top of a utility box in Tehran while waving her headscarf, was beaten up and arrested by a plainclothes officer. An eyewitness reported that the woman’s elbow was fractured after she was violently pushed off the box and knocked down to the ground.

In recent weeks, the Iranian authorities, including the Chief Prosecutor of Iran and the Head of the Revolutionary Court in Tehran, have insulted women protestors by calling them “morons,” “infantile,” “deceived,” “perverted” and “wicked” and accused them of association with “foreign enemies”.

Iran’s judiciary spokesman Gholam-Hossein Mohseni-Eje’i has said that the women protesting against compulsory veiling are “acting under the influence of “synthetic drugs” or receiving instruction from “organized criminal groups”.

“The Iranian authorities must hold law enforcement officials to account for human rights violations, including torture and other ill-treatment and refrain from making any statements that incite further violence and abuse,” said Magdalena Mughrabi.