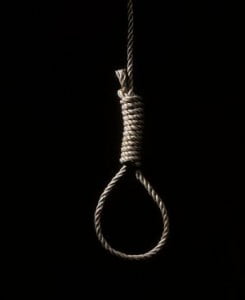 Iran Human Rights – According to different reports from Iran, at least 20 people may have been executed during the last three days. All those executed have been charged with drug trafficking by the Iranian authorities.

No independent sources have confirmed the charges.

Seven people were executed in the Kerman province:

Seven people were hanged in the towns of Jiroft and Bam in the Kerman province, south east of Iran, reported the official web site of the Iranian judiciary yesterday March 1. According to this report five of the executions took place in the prison of Jiroft and two in the prison of Bam. Those who were executed were identified as: “Mohammad Nabi N.” convicted of trafficking of 60 kilos of morphine, “Mehdi S.” for keeping and carrying 8 kilos and 145 grams of crack, “Ali Bakhsh S.” for keeping, carrying and selling 50 kilos opium, “Hamidreza D.” for carrying 31 kilos and 250 grams of heroin, “Sohrab N” for carrying 2 180 grams of heroin, “Malek N.” for keeping 900 grams of crack and “Saeed M” for participation in trafficking of 6 kilos morphine, 5 kilos heroin and 23 kilos of crack.

Three people were executed in Shiraz:

According to the official site of the Iranian judiciary in Shiraz, three people were hanged in the Adelabad prison of Shiraz. According to this report that was published yesterday, “A. A.”, “H. R.” and “S. K.” were convicted of “armed” drug trafficking of heroin and opium.

According to the same website, another person identified as “M. M.” was lashed 70 times in the “Khomeini square” of Lamerd , in the Fars province. He was convicted of stealing animals and sentenced to three years in prison and 70 lashes.

Execution of 8-11 people in Orumiyeh:

According to the IHR’s annual report on the death penalty in Iran in 2010, at least 546 people were executed in 2010 in Iran. According to this report there are more than 200 cases of unconfirmed executions in addition to the 546, that haven’t been included among in the annual report.

Mahmood Amiry-Moghaddam, the spokesperson of IHR, condemned these executions and said:” This is a regime which is uses execution as a tool to extend its survival”.