Syrian regime media reported airstrikes across a wide area around Damascus on Thursday morning. Incidents took place near Marj al-Sultan Airport, about 8 km. north of Damascus International Airport, at a key interchange of the M5 northeast of Damascus and south of the city near Kiswa and Izra. 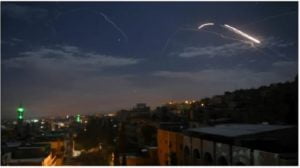 Meanwhile, Damascus is distracted by a major battle in northern Syria against Turkish-backed Syrian rebels and extremists. Iran may be maneuvering to increase its role in southern Syria amid the tensions as the Syrian regime focuses on fighting in northern Syria’s Idlib.

The Islamic Revolutionary Guard Corps Quds Force has a new commander, Esmail Ghaani. He took over after Qasem Soleimani was killed in a US airstrike. Soleimani had raged against Israel and, along with IRGC leader Hossein Salami, had vowed to confront and destroy Israel.

Ghaani wants to fill the big shoes left behind. The US says Ghaani will continue the role of the force. He met with the heads of Iraq-based Shi’ite militias. Ghaani has been designated by the US as a terrorist since 2012. He was responsible for financial disbursements to Hezbollah in Lebanon and “Quds Force weapons shipments intended for The Gambia,” the Pentagon said in a recent report.

Ghaani has elevated Mohammed Hejazi, the man behind transferring precision-guided munitions to Hezbollah. This indicates that Ghaani will want to use his existing networks and knowledge to challenge Israel.

Iran’s role in Syria is well known. It has sent members of the IRGC to Syria to support the Assad regime, and it has recruited tens of thousands of fighters, mostly Shi’ites, to go to Syria and fight. Reports indicate that more than $30 billion has been spent by Iran in Syria and 80,000 fighters recruited and trained by the IRGC have travelled to Syria. However, the overall numbers of IRGC members in Syria may be under a thousand. Tens of thousands of the recruited fighters are said to be from other countries.

Read more at: The JPost

On 3rd of January a news spread in social media regarding Qasem Soleimani and AbuMahdi Mohandes who has died by a US drone strike near Baghdad Airport and this was the end of their lives. In social media, especially Iranian users, there was a chaotic situation, some called of “the general of... END_OF_DOCUMENT_TOKEN_TO_BE_REPLACED