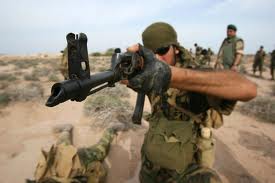 Israel boosted its Syrian and Lebanese border units as special flights carrying thousands of pro-Palestinian activists from Tehran touched down in Damascus Tuesday, March 27 for the international Global March to Jerusalem Friday, March 30. Before taking off, they were split into small groups and tutored by Iranian Al Qods Brigades officers in tactics for breaching Israeli border barriers, bursting through and challenging the Israeli military forces defending the border.

On arrival in Damascus, one group of activists was sent by special bus to Lebanon, where

Hizballah officers stood by to lead them to villages close to the Israeli frontier; a second is assigned to face Israeli lines on the Golan.

These anti-Israeli activists from several countries are being planted at strategic points to carry out the plan hatched together by Iran, Syria and Hizballah to ignite Israel’s two northern borders in solidarity with the annual Israeli-Arab Earth Day next Friday.
Earlier reports from Damascus that the demonstrators would keep the Quneitra sector of the Golan and the Lebanese Beaufort were meant to put the Israeli command off its stroke by disguising the real scope of their plans and their objective:  a mass assault on Israeli borders. They are programmed to coincide with the outbreaks the Palestinian Authority is preparing for Jerusalem and the West Bank and Israeli-Arab disturbances inside Israel – all on the same day, as DEBKAfile reported earlier Tuesday.
The Palestinian extremists of the Gaza Strip will certainly not stand aloof.