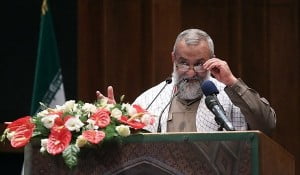 “Our Armed Forces have a big collection of drones made by the devil forces, but they will not announce it due to security reasons,” General Naqdi told reporters on Monday.

The Basij commander that the Iranian Armed Forces are much more powerful than what Israel and the US think.

“The Zionists should pack up and go because the crimes committed by them and the fiasco that they have created has made their supporters leave them deserted,” General Naqdi added.

He stated that those who are still supporting the Zionist regime are a bunch arrogant powers who are seen as Zionists themselves.

“This mischievous attempt once again made the adventurous nature of the Zionist regime more evident and added another black page to the dark record of this fake and warmongering regime, which is full of crimes and wickedness,” the statement added.

The IRGC further warned that it “preserves the right of response and retaliation for itself”.