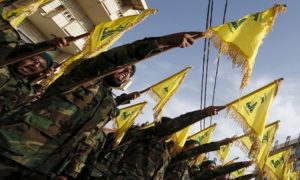 The operatives were in Al-Jawf and Nihm, areas that witnessed intense fighting at the start of the year. These locations, known to be heavily tribal, are strongly aligned with Yemen’s government and the majority of them are under its authority. Hezbollah’s involvement and cooperation with the Houthis in these areas point to Iran’s overall interest in sustaining violence in Yemen and increasing the Houthis’ territorial gains, as it relies on its proxies to bolster its overall position in its current standoff with the US.

This increased appetite for violence and expansion is at odds with the Houthis’ rhetoric of de-escalation, which it signaled in September last year. The activity points to a renewed calculus in Yemen’s war, dictated to a large extent by Iran’s interest in the region, especially since the death of Islamic Revolutionary Guard Corps (IRGC) member Qassem Soleimani, who was the commander of Iran’s expeditionary Quds Force that specializes in unconventional warfare outside of Iran’s borders.

Evidence to support Iran or Hezbollah’s military involvement in Yemen was challenging to come by at the beginning of the conflict. But this involvement has been uncovered gradually throughout the years, showing a series of sophisticated covert operations and military support that elevated the Houthis’ capability. IRGC operatives thrived in Yemen and were able to enter the country and travel freely using Yemeni passports issued to them by the Houthis, according to local sources. Abdul Reza Shahlai, the deputy commander of the Quds Force, was recently targeted by the US in Yemen. Shahlai and his comrades have been focused on external operations that would serve Iran’s overall regional interests, including hampering the Saudi-led coalition’s actions in Yemen and attacking the Kingdom’s oil and military installations.

Iran, through its IRGC operatives and Hezbollah strategists, has set an agenda in parallel to the Houthis’ in order to reach its objectives in the region. Within this context, Iran helped the Houthis expand to achieve Tehran’s broader regional vision, which extends well beyond the scope and capacity of the Houthi group. Through the “Axis of Resistance” network, which the Houthis openly flaunt their membership of, extremist Shiite groups are uniting under Iran as a rival to Saudi Arabia, choosing destruction and violence as their methods of resistance.

On 3rd of January a news spread in social media regarding Qasem Soleimani and AbuMahdi Mohandes who has died by a US drone strike near Baghdad Airport and this was the end of their lives. In social media, especially Iranian users, there was a chaotic situation, some called of “the general of... END_OF_DOCUMENT_TOKEN_TO_BE_REPLACED