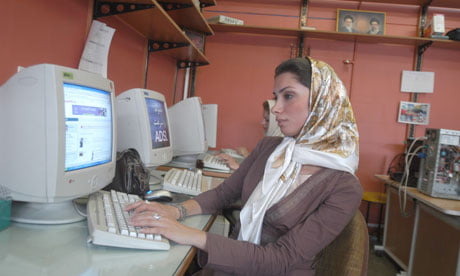 Whenever Maysam, a prominent Iranian blogger, connects to the Internet from his office in the bazaar, he switches on a special connection that for years would bypass the Islamic republic’s increasingly effective firewall.

But recently the software, which allowed him and millions of other Iranians to go online through portals elsewhere in the world, stopped working. When it sporadically returns, speeds are so excruciatingly slow that sites such as Facebook and Balatarin.com – which evaluates unofficial news and rumors in Farsi — become unusable.

“There has been a change,” said Maysam, who spoke on the condition his last name not to be used out of fear of being summoned byIran’s cyber police. “It seems that the authorities are increasingly getting the upper hand online.”

Having seen social media help power uprisings across the Middle East, Iran’s leaders are trying to get control over what is uploaded, posted and discussed on the Internet. And after a slow start, authorities are becoming more and more successful, Iranian Internet users say.

Many fear that the disabling of the software used to bypass the state-run firewall heralds the coming of what authorities have labeled the National Internet. The government’s technology officials have announced the construction of a domestic Internet network comparable to an office intranet, which would block many popular sites. They have hinted the National Internet can be launched at any time, and have said it will gradually start working over the coming three years.

The move is borne out of necessity, authorities say, in order to prevent Iran’s Western enemies from spying on Iranian citizens. The crackdown on Internet freedom comes amid tension in Iran over a series of mysterious assassinations and explosions that have been blamed on U.S. or Israeli spies. The West has put increasing pressure on Iran in recent months to abandon its uranium enrichment program, which Iran insists is peaceful but which the U.S. and others claim is geared toward the development of a nuclear weapon.

Iranian officials have accused U.S.-based technology companies such as Google, Twitter and Microsoft of working in tandem with U.S. authorities to spy on Iranian online trends, search behavior, social networks and e-mail. The companies have denied those allegations.

During 2009 protests in Iran by opposition groups, the State Department did ask Twitter to postpone maintenance on its site, as U.S. diplomats believed that the microblogging site was being used by Iranian protesters to direct events on the ground in Tehran.

“They are stealing people’s information and following their own … goals,” said Reza Taghipour, the communication and information technology minister, when speaking about foreign governments and online companies in January. “We need [the National Internet] to protect the privacy of families.”

Officials stress that there will still be access to the Web — just not to the “damaging” sites. But Iranian Internet users and activists fear that the activation of the National Internet will cut them off from the rest of the world, and put them under increased surveillance by authorities.

“Basically they are already shutting off access to all interesting Web sites,” Maysam said. “We will resemble an isolated island in a changing world if this happens.”

In September, Diginotar, a Dutch Internet certificate authority, was hacked and security certificates – digital keys – to sites such as Google and Yahoo were stolen. The theft came to light when hundreds of thousands of Gmail users in Iran started noticing odd rerouting of their e-mails.

An Iranian hacker who calls himself Sunich in his e-mails — after a popular drink that is given away during state-organized rallies in Iran — claimed that he stole the certificates and handed them over to Iranian authorities. “Like in other countries, those who cooperate with Western intelligence services must be punished,” he wrote in an e-mail, saying Iranian authorities had the right to determine who in the country was working for foreign spy agencies.

Already bloggers and activists face arrest over what they have written online. An Iranian Canadian Web developer, Saeed Malekpour, 36, is awaiting execution after he wassentenced to death for what the judge said was “spreading pornographic material.” Malekpour has insisted he only created an upload site that was abused by others.

Mostafa, 27, who works as an assistant in a printing house, said he said bade farewell to the Internet last week. “None of the fun sites such as Facebook work anymore. All I can read is official Iranian news Web sites,” said Mostafa, who spoke on the condition his last name not be used. “Now I devote myself to work, only work. No Internet.”

The Guards Entry into Political Affairs