Jul 12, 2019 IRGC, Politic, Quds Force, Slider Comments Off on Iran Is Training Iraqis to Shoot Missiles at Israel, and the U.S. Is Paying for It

Although it was originally thought that Iran-backed Houthi rebels in Yemen attacked a Saudi oil pipeline with a drone on May 14, the U.S. government recently confirmed that in fact it was Kataib Hezbollah, an Iraqi militia fully under Tehran’s control. Kataib Hezbollah is but one of several paramilitary groups the Islamic Republic funds and directs in Iraq, under the auspices of its Islamic Revolutionary Guard Corps (IRGC). Michael Pregent explains the implications: 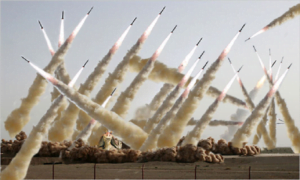 [Iran’s] ability to carry out proxy attacks against a U.S. ally from Iraq, another supposed U.S. ally, highlights America’s failed strategy in Baghdad. As a result of American and Saudi pressure, Iraq’s Prime Minister Adil Abdul Mahdi ordered the closure of IRGC militia offices across the country on July 1. However, militias have ignored similar calls before; the Iraqi government either cannot or will not remove the Iranian-backed militias from its territory, nor will it prevent them from targeting U.S. allies. Senior Iraqi politicians will not dare challenge the militia leaders. . . .

Instead, the Iraqi government has been compromised by Iranian influence and allows senior Iranian figures to freely operate in Iraqi territory. [For instance], Abu Mahdi al-Mohandes, . . . holds an official Iraqi government position [and] is also the leader of Kataib Hezbollah. . . . As a member of government, Mohandes has access to U.S. intelligence, training, and equipment. . . . Kataib Hezbollah has [also] been trained by the IRGC and Lebanese Hizballah to fire advanced guided missiles from Southern Syria to Israel.

U.S. Imposes Sanctions on Hezbollah Officials Accused of Supporting Iran The 120 Year Struggle of the Iranian People for Freedom

On 3rd of January a news spread in social media regarding Qasem Soleimani and AbuMahdi Mohandes who has died by a US drone strike near Baghdad Airport and this was the end of their lives. In social media, especially Iranian users, there was a chaotic situation, some called of “the general of... END_OF_DOCUMENT_TOKEN_TO_BE_REPLACED