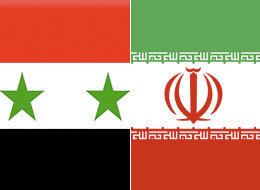 Now Lebanon-Farther south, in the dense suburbs of Beirut, Iranian largess helped to rebuild neighborhoods flattened six years ago by Israeli bombs — an achievement that was commemorated this month with a rollicking celebration.

“By the same means that we got weapons and other stuff, money came as well,” the

Hezbollah leader, Hassan Nasrallah, exclaimed to roars of approval from the crowd. “All of this has been achieved through Iranian money!”

Iran’s eagerness to shower money on Lebanon when its own finances are being squeezed by sanctions is the latest indication of just how worried Tehran is at the prospect that Syria’s leader, Bashar al-Assad, could fall. Iran relies on Syria as its bridge to the Arab world, and as a crucial strategic partner in confronting Israel. But the Arab revolts have shaken Tehran’s calculations, with Mr. Assad unable to vanquish an uprising that is in its 15th month.

Iran’s ardent courtship of the Lebanese government indicates that Tehran is scrambling to find a replacement for its closest Arab ally, politicians, diplomats and analysts say. It is not only financing public projects, but also seeking to forge closer ties through cultural, military and economic agreements.

The challenge for Iran’s leaders is that many Lebanese — including the residents of Tannourine, the site of the proposed hydroelectric dam — squirm in that embrace. They see Iran’s gestures not as a show of good will, but as a stealth cultural and military colonization.

The Lebanese have largely accepted that Iran serves as Hezbollah’s main patron for everything from missiles to dairy cows. But branching out beyond the Shiites of Hezbollah is another matter.

“They are trying to reinforce their base in Lebanon to face any eventual collapse of the regime in Syria,” said Marwan Hamade, a Druse leader and Parliament member, noting that a collapse would sever the “umbilical cord” through which Iran supplied Hezbollah and gained largely unfettered access to Lebanon for decades.