Iranian authorities have failed to hold security forces accountable for excessive and unlawful use of lethal force in confronting large-scale protests that began on November 15, 2019, Human Rights Watch said today.Iran 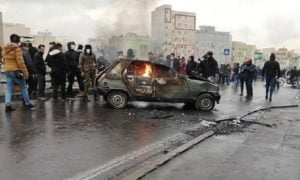 Over three months later, the government has failed to announce the total number of deaths and arrests during the protests, which spread to many parts of the country over a week. Interviews with victims and witnesses, a review of photos and videos from the protests, and satellite imagery analysis strongly suggest that security forces used unlawful lethal force on at least three occasions. The total number of such cases is most likely higher.

“Iranian authorities have systematically repressed dissent for decades, and they are now confronting popular protests with an astonishing level of violence,” said Michael Page, deputy Middle East director at Human Rights Watch. “Principled international voices should send an unequivocal message that Iran cannot get away with killing protesters.”

The protests began over an abrupt fuel price increase, but they transformed into broader popular discontent with the government’s repression and perceived corruption. The government imposed a near-total internet shutdown from November 15 to 19.

Due to the internet shutdown and authorities’ threats against families of victims, documenting the full extent of the crackdown, including the total number of people killed, has been difficult. Amnesty International has estimated that at least 304 people were killed. The Human Rights Activists News Agency (HRANA) has verified the identities of more 100 people killed. Media reports indicate that the death toll may be much higher. A member of parliament put the number at 170, while official media outlets have reported the deaths at least 5 members of the security forces during the protests. One parliament member said about 7,000 people were arrested.

Four informed sources told Human Rights Watch that the authorities have banned families from conducting interviews with media and threatened them with retaliation if they do. On December 23, the authorities arrested several members of the Bakhtiari family after they called for a public mourning to commemorate the 40th day of their son’s death. On January 22, the authorities released Bakhtiari’s father, pending trial.