Iran is looking to Syria peace talks next week as a chance to build on its regional clout, experts say, as Tehran, Moscow and Ankara all stake out claims for influence.

The Syrian army’s victory in recapturing the rebel stronghold of east Aleppo last month has thrust Tehran to the centre of the diplomatic game playing out over the country’s future.

The win was achieved with crucial assistance from Iranian military advisors and thousands of “volunteer” fighters. 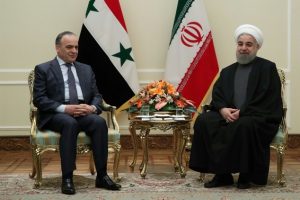 President Hassan Rouhani said this week that the co-sponsors of the peace talks opening in Astana on Monday — Iran, Russia and Turkey — were the only powers with the influence to turn the fragile ceasefire between the Syrian government and rebels into a lasting settlement.

But resolving the different interests and plans of the co-sponsors will prove tricky.

For Iran, the priority is to ensure the survival of longtime ally President Bashar al-Assad, or at least a carefully managed transition that stops Syria falling into the hands of extremists or a government that sides with its rivals in Saudi Arabia and the United States.

It also wants to maintain a secure land route across Iraq and Syria to Lebanon, where its ally Hezbollah sits on the frontline of its longer-term concern: Israel.

“The war in Syria is not seen as a civil war in Tehran. It’s rather perceived as a micro world war determining the geopolitics of the Middle East,” said Adnan Tabatabai, Iran analyst and CEO of Germany-based think tank CARPO.

“Tehran is convinced that Israel would have carried out air strikes against Iranian nuclear sites… if Hezbollah did not exist as a deterrence on the Israeli-Lebanese border,” Tabatabai said.

“So access to Hezbollah and maintaining the so-called ‘axis of resistance’ through Syrian territory is a key priority for Iran.”

Negotiations between Iran and Turkey, which has been on the opposing side in the war as a backer of Islamist rebel groups, were always going to be thorny.

More surprising have been the cracks starting to emerge in Tehran’s ties with Moscow, which has been the other chief supporter of Assad.

Iran is worried that Russia appears to be shifting its allegiance towards Turkey: working with Turkish forces against the Islamic State group and excluding Iran from initial ceasefire talks in northern Syria.

Ali Vaez, of the International Crisis Group, said Iran and Russia were only ever “tactical partners, not strategic allies”.

“Russia doesn’t appear to share Iran’s key priorities in Syria. Not only does Assad appear more dispensable to Russia than he is to Iran, but Russian officials also appear more comfortable with the concept of federalism in Syria than their Iranian counterparts,” said Vaez.

IRGC commander warns against protests in Iran after Egypt uprising

Bahareh Hedayat returned to prison after end of furlough

The Covert Intelligence War Against Iran