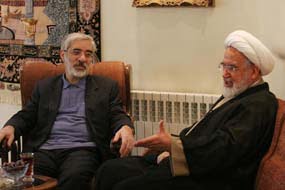 TEHRAN (AFP) – Two opposition leaders in Iran want a halt to “unrestrained” executions which, they say, are spreading fear among Iranians and isloating the country internationally, a website reported Wednesday.

“As citizens of this noble Iranian nation, we urge that these unrestrained and illogical executions be halted,” Mir Hossein Mousavi and Mehdi Karroubi were quoted as saying by Sahamnews.org, which belongs to Karroubi.

Iran has hanged 67 people so far this year, according to an AFP tally based on media reports. The foreign ministry says that 80 percent of those executed were drug smugglers.

Karroubi and Mousavi, who oppose President Mahmoud Ahmadinejad’s government, said the executions have only managed to “spread fear” among the people and “forced further isolation of Iran in the international community.”

Given the current rate of about two executions per day since January 1, the number of hangings in Iran is set to exceed the 179 reportedly executed in 2010.

Mousavi and Karroubi said that nearly 300 people were hanged in 2010 and that some had been executed before the conclusion of judicial proceedings.

“Regardless of charges and whether they are true or false, it is a legal and religious right of every human being that his judicial and legal process be completed,” they said, adding that such executions were “un-Islamic.”

Iran says it exercises the death penalty to establish law and order and that executions are carried out only after exhaustive judicial proceedings.

The surge in executions this year has generated criticism in the West, especially after Iran hanged an Iranian-Dutch woman on drug-related charges after she was originally arrested for joining an anti-government protest.

The Netherlands has frozen diplomatic ties with Iran over the hanging of Zahra Bahrami on Saturday, but the Iranian government said it regarded her as an Iranian as the Islamic republic does not recognise dual nationality.

Iran has also recently hanged two members of the outlawed People’s Mujahedeen of Iran (PMOI) who were arrested during unrest that erupted after Ahmadinejad’s re-election in June 2009.

They were the first to be executed among those arrested and charged in connection the post-election unrest, with the Iranian authorities have blamed on Mousavi, Karroubi and their supporters.

In 2009, the last year for which complete statistics are available, Iran executed 388 people, according to international human rights groups, making it second to China in the number of people it put to death.