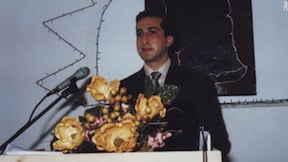 “I was informed yesterday evening that the Gilan [Province] Court ordered the execution” said Firouz Khandjani, a council member of the pastor’s Church of Iran, one of the country’s largest house church movements.

Khandjani, who is in hiding with his family, added he feared the pastor could be hanged within 24 hours at the Lakan Prison near the northern city of Rasht. “Officially his lawyer still needs to receive a notification first, but nobody keeps the law in Iran,” he told BosNewsLife.

Several other prisoners are known to have been hanged in the prison facility, including at least two last month, according to rights activists.

Khandjani made clear that even if the pastor is not killed Tuesday, the Church of Iran still fears “the execution is imminent because of this order.” He said the lawyer and church was informed about the decision by a trusted source within Iran’s judiciary.

The apparent order came after local Christians said last month that Nadarkhani rejected an offer to be released from prison if he publicly acknowledges Islam’s prophet Mohammed as “a messenger sent by God.”

Iranian authorities reportedly summoned lawyers for Pastor Nadarkhani to his home city of Rasht on December 30, to explain the deal. Local officials indicated they would release the pastor if he agreed to make the statement about Mohammed, Christians with close knowledge about the situation told BosNewsLife at the time.

Christians said the pastor made clear that making the demanded statement about Muhammed would amount to abandoning his faith in Jesus Christ.

The 34-year-old Nadarkhani, who is married with two children, has been detained since 2009 when he was captured in his home city of Rasht to register his house church.

The Gilan Court sentenced Nadarkhani to death in November 2010 on charges of “apostasy”, or abandoning Islam.

His appeal against that ruling was seen as being rejected in 2011. The Supreme Court said “he can be executed” but added it would first ask a “re-examination” by the same court that already sentenced him to death.

The Gilan Court eventually asked Iran’s supreme leader Ayatollah Khameini for an opinion in what critics saw as an attempt to make someone else responsible for his execution.

Khameini is not known to have made a ruling on the case, though Iran has an often highly secretive judicial system.

Church official Khandjani suggested the execution order was part of a new strategy by Iran’s government to take out perceived opponents amid growing international pressure on the country over its nuclear program amid fears the nation develops an atomic bomb.

“If there is ever a war, the regime wants no opponents,” Khanhjani said. Iranian officials have also condemned the spread of Christianity in the country, where church groups have counted at least 100,000 devoted Christians, many of them former Muslims.

The reported execution order came as a setback for the defense team and other observers close to the case who previously said they learned from the court that judges were ordered to “do nothing” for one year.

However Khandjani already warned at that time that Iran’s government may want to execute the pastor earlier. “Saying he will be held one year more does not necessarily mean an earlier execution isn’t possible,” he told BosNewsLife recently.

Iranian officials have defended their actions against Nadarkhani, but recently tried to play down apostasy charges.

Gholam-Ali Rezvani, deputy governor general of the northern province of Gilan where the pastor is being held, told the government linked Fars News Agency (FNA) that Nadarkhani was “a Zionist, a traitor and had committed security crimes,” without elaborating.

Iranian officials have also said their actions are aimed at defending “Islamic values”.

The European and the United States have urged Iran to release Nadarkhani.

He is is among several pastors and other Christians being detained in the strict Islamic nation.

Among them is also Farshid Fathi Malayeri, an evangelical church leader who has been held in prison since December 2010, Iranian Christians said Tuesday, February 21. His trial reportedly took place earlier this month, February 5, in a Revolutionary Court based in Tehran’s notorious Evin Prison. The court was expected to deliver its verdict in three months time.

The father-of-two was detained by authorities on December 26, 2010 during raids which targeted a large number of Christian citizens and house church members, many of whom were later released after what rights activists described as “exorbitant bail” payments.

Farshid Fathi Malayeri was kept in solitary confinement for a large part of his incarceration, and interrogated by agents working for the Ministry of Intelligence about his church activities and contacts abroad, said advocacy  group Christian Solidarity Worldwide, (CSW). Eventually, the equivalent of nearly $200,000 was demanded as bail for his release, but when his family eventually managed to raise the money, the authorities refused to release him, rights activists said.

Fathi is reportedly being held in the general ward of the prison. He is believed to be in good health and his family has been allowed to visit him, Christians said.

Iran can always destroy the US bases in Iraq, Bahrain and Saudi Arabia

Another Gonabadi Dervish arrested in Kavar

Information on the Commander Who Confessed to the Iran election Coup

Why is Tehran recruiting Daesh militants?